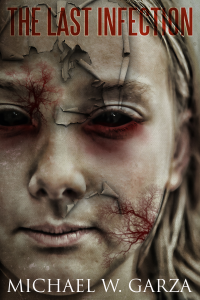 Reviewed by James B. Carter

When you read and review as many zombie books as I do, sometimes even the good ones seem to run together. A person gets bit, bites back and then the formulated chaos ensues. As a reader, and hard-core fan of the often rhetorical zombie genre, I scarcely find anything new in the way of plot development, but like I said, I’m a fan so I read what offerings come my way regardless. Finding a good walking dead book to read isn’t a problem in my line of work, but finding a great one is often like trying to find the proverbial needle in a haystack. Luckily for me I found that needle, and it was written by Michael W. Garza.

The Last Infection is a gloomy, flesh eating apocalyptic gore novel at its best. It’s like a great song that hits all the right notes, and as somber as some of those notes may be, it’s still beautiful and catchy nonetheless. Mr. Garza relies on his writing skills, and not cheap thrills. He provides a character driven story that you care about, instead of pasting in gore and violence just to sell an extra book or two. This story and the characters that are involved are a work of passion, and not the work of someone expecting a paycheck. This shows greatly in Michael’s work.

In The Last Infection, a couple of recently orphaned children, siblings, Alicen and Jake Bradley cross paths with another survivor named Chris. The adult survivor, struggling to drudge through existence in the midst of the debacle that the world has become, had stopped making decisions that benefited others. Because in this new world; an infected world, there is a thin line between humanity and indifference. It’s a line that could be the difference between life and death.

Against his better judgment, Chris begrudgingly takes the 9 and 12-year-old under his wing. Symbolically it’s not about him befriending and saving a couple kids, it’s more about his humanistic integrity and in how saving them, he would save himself from the callous being that the recently changed world had forced him to become.

Is there great adventure and peril? Yes. Is it violent and atmospherically gruff? Yes. We wouldn’t want any other way, but what really makes this book shine is Garza’s astute ability to care about the words on the page, character arc and the use of underling themes. Sometimes I caught myself thinking, “so this is what it would be like if Salinger wrote the zombie book?”