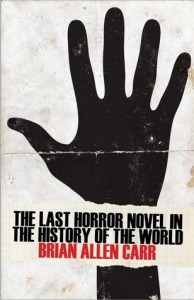 Brian Allen Carr’s The Last Horror Novel in the History of the World features the author’s sparse but very literary style in a short novel of about 120 pages, yet managed to fill each page with jarring descriptions and fantastical imagery enough for 10 books. He seems to enjoy flash fiction styled chapters that teases the mind and delight the eyes evidenced in the first paragraph (and chapter) of the novel…

“Scrape, Texas – far from fame or infamy – appeared on maps, was passed through by travelers. A blink of crummy buildings, wooden households – the harsh-hearted look of them, like a thing that’s born old.”

And on to the next chapter.

Scrape, Texas is indeed a desolate blink of the eye. Its residents might be called losers but they never appeared to have been anyplace but Scrape and never had the choice of either winning or losing. When Carr’s bizarre apocalypse arrives, you can almost hear the sigh of “What now?” coming from the town’s inhabitants. The author evokes a number of Latin American mythologies in his very literary end of the world, appropriately so since the fictional town of Scrape exists close to the West Texas-Mexico border. Many sections are fittingly disturbing and horrific. But I am not sure this should be called a horror novel. From the first few pages, Carr have created an eerily accurate description of small town desert life with its drunks, gun aficionados, directionless teens, and an endless sense of resignation. It takes Mexican apparitions like La Llorona, disembodied hands and the whip-ladened El Abuelo to truly pull Scrape’s inhabitants out of their present indifference.

The Last Horror Novel in the History of the World is best read as a painting in prose; a look at taken-for-granted ennui placed on its head and shaken. It is a beautifully odd and quirky vision. There may be some hidden meaning to life in this work but if there is, Carr is going to make you work for that meaning. Yet it is unarguable that this thoughtful work reads quickly and effortlessly in a way that keeps the reader both entertained and pleasantly, if disturbingly, disoriented. The only minor issue is with the ending that comes abruptly, leaving the reader thinking, “And then what?” But it fits. There is nothing ordinary about this novel. If you are looking for something different in literary fiction, you found it.