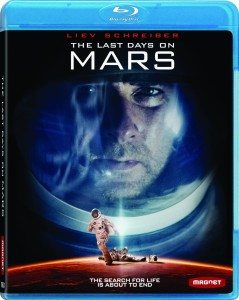 The Last Days on Mars

Sci-fi horror is a rare and special thing. Like Reese’s Peanut butter cups, it’s two great things that should go great together, but sadly, that’s not always the case. For every Alien there’s a Ghosts of Mars, and speaking of that John Carpenter directed turkey, that was what went through my mind when I got this latest mars based fright flick. But I’m a trooper, it’s my job to watch bad movies if only to warn you nice people to stay the hell away from them, and to be honest, things did not bode well for this one. I mean, what was the last good Mars movie to come out? Yeah, that’s what I thought. So was this one to be more lameness like Red Planet, or would it be a slice of awesome like Total Recall (the original, not that horrible remake)? Well grab your spacesuit, don’t forget your Tang (and if you get that reference, you’re probably old), and let’s take a walk on the Mars side.

The movie starts off exactly like you would expect. There’s an international crew of astronauts exploring the not-so-red-anymore planet. Yes, Mars here looks a lot more like the pics we got from the real life Mars rover than any of the overly red Mars of earlier films. I liked that. Anyway, the spacemen uncover something buried in the Martian soil that soon gets loose and causes an infection that turns people into murderous sort-of-zombies. For those not yet infected, they’ve got to try to avoid the former friends turned death machines, and all that is made doubly hard thanks to Mars not being the most friendly place to humans.

So the basic plot is nothing ground breaking, but the story is handled well, and I’m fine with a movie not reinventing the wheel as long as it’s enjoyable and good, and The Last Days on Mars is both of those. Because all the astronauts are trapped in small, tight quarters, the whole movie has a very claustrophobic feel. On Mars, you simply can’t book out the back door to escape the monsters that want to eat your face off. As for those monsters, yeah they’re basically space zombies with a tad more brains to them, but they are nevertheless a nice, creepy menace. Add to that good performances by all, including lead actor Liev Schreiber, who I am not always a fan of, and well-done direction by Ruairi Robinson. I believe this is Mr. Robinson’s first full length feature and he handles it well. I look forward to seeing what he does next.

As such a nice surprise the movie was, the new Bu-ray from Magnet was a bit of a disappointment when it came to the special features department. There is a making of featurette that runs 15 minutes. It’s pretty much a puff press piece that sadly doesn’t have any real inside info in it. There is a short (six minutes) piece on the visual effects and a collection of scenes that compare the raw footage with the final product that runs about four minutes. Last, and certainly least, there’s something called an “Axs TV” look at the movie that just uses the same bits from the previously mentioned making of feature. Oh and there’s a trailer too. There is no commentary track, no interviews, and nothing all that interesting. The movie did look great in HD, but in this day and age, that’s just par for the course.

If you like your sci-fi mixed with horror, then you should enjoy The Last Days of Mars. While it doesn’t really do anything all that new, it is a fun, and sometimes even frightful, watch. The acting is good across the board, the direction is competent, the special effects are pulled off with skill (something that not all sci-fi flicks can claim), and there are moments of real suspense mixed with a healthy dose of jump scares. For lovers of sci-fi horror, consider it highly recommended. If you’re one of those puritans that don’t like your genres to mix, I’d still say give it a shot and just replace Mars with Detroit, another environment that’s hostile to human life, and you’ll be fine. Hey, I’m from Michigan, I’m allowed to make that joke. Regardless, consider The Last Days of Mars well recommended.