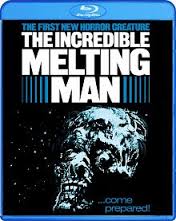 I first saw this slice of 1970s low budget horror as a teen one late night on cable and I never forgot it, even though I haven’t seen it since. It wasn’t because of the power of its story, as it is a very simple tale. It wasn’t because of the awesome acting. While none of it is all that bad, it’s basic drive-in flick quality. It wasn’t super scary like The Exorcist, or crazy over the top like Re-animator, nor was it chock-full of naughty nudie bits to get my teenage libido racing like Lifeforce (or again, Re-animator). And yet like all of those other movies that I discovered at an early age, it never really left me. While The Incredible Melting Man had some of all those elements in it, what I always remembered about it was the gloriously gooey, gory makeup effects of watching a man slowly fall to pieces right before my eyes on screen. But that was when I was a kid, would this movie still hold up to my memories of it now all these years later? Well grab your galoshes and a mop and let’s find out. That is, if you’ve got the stomach for it.

In this movie an astronaut gets a heavy dose of space radiation one day while on a mission to Saturn. Unfortunately for him, instead of getting superpowers like the Fantastic Four, it causes him to melt over time. This horrible affliction naturally affects him mentally as well physically, so he escapes from the hospital and starts wandering the desert in his pajamas, killing people he comes across like a gooey Frankenstein’s monster (seriously, there more than a few allusions to that classic in this movie), and continuing to liquefy with every step. Our deranged, deadly, and dissolving astronaut leaves a trail of bodies in his wake and is pursued by his friend who wants to find and help him if possible. And really, that’s all there is to the story behind this mushy monster mash of a movie. It’s a bit of a throwback to 50s shockers where a guy gets a dose of radiation and then you watch him self-destruct like The Amazing Colossal Man and The Cyclops. Just in the case of this movie, the self-destruction is more literal.

However there is more to this flick than its simple story.

First and foremost there are the amazing makeup effects used to show a man melting away. I mean every time you see this poor astronaut he looks worse and worse. He leaves a slimy trail of goo everywhere he goes and various pieces of himself all over the place. An ear here, an eye there, even an entire arm at one point. However as he melts he also gets stronger for some strange reason, not to mention more out of control and therefore more deadly. So if you’re a gorehound and you’re looking for some splatter, The Incredible Melting Man will feed your need nicely.

In addition to the sensational slop (and I say that with love) there is a real sense of humor to be found here. You can tell that the moviemakers knew exactly what kind of flick they were making and they embraced it. From groan inducing dialog to the ignoble end of the melting man, while the goop drips off of the screen you can get the sense that the movie is winking and smiling at you. When it is all said and done, The Incredible Melting Man is a fun monster movie and not one damn thing more. But I am fine with that. No, I love that. This is drive-in cinema at its finest.

Now for the extras on this new Blu-ray. Yes, even for this low budget, largely forgotten flick, Scream Factory has scared up some goodies for this good looking new release. There is a commentary track with writer and director William Sachs that’s both informative and pretty entertaining. William speaks very frankly about the trials and tribulations of making this movie that I found to be a nice change from most director’s commentaries. However, befitting the real star of this movie, the gooey, goopy, gross out effects, the FX wizardry gets the lion’s share of the spotlight here with a short interview (just under 3 minutes) with makeup artist Greg Cannom and another combo interview with director Sachs and make up master Rick Baker who worked on this movie before going on to bigger and better things like American Werewolf in London where he won an Oscar for his efforts. This interview, really it’s more of a featurette, runs about 20 minutes. Theatrical trailers, a photo gallery, and a radio spot brings the extras to a close.

The Incredible Melting Man is low budget, 70s shock cinema at its best. It’s a simple story, the entire plot is right there in the title, but it’s told well and the disgusting, dripping, flesh-melting effects still hold up today. In fact they look miles better than most of the CGI gore gags that low budget modern movies rely on these day. This isn’t a thinking man’s movie, it’s a roller coaster; something designed to produce screams, laughs, a rush, and perhaps even some stomach queasiness. It does all of that pretty well and for that I can give The Incredible Melting Man an easy recommendation. You can get your own copy of this new Blu-ray when it comes out on July 30th.