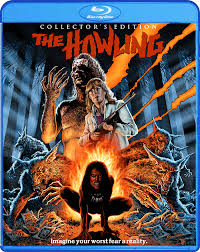 Good werewolf movies are sadly few and far between. Or at least, they are far outnumbered by decent flicks about vampires, zombies, ghosts, and psycho killers. That’s both sad and crazy as the shaggy shape-changers are a solid #2 on the who’s who list of movie monsters. Thankfully there are a few flicks that get werewolves right, and one of the best is 1981’s The Howling. Part horror story, part mystery, and with plenty of black comedy, it is an amazing fright flick that has never been on Blu-ray before…until now. But because this movie is so good, if you’re a horror fan, then chances are you already own this movie on DVD. So the question then becomes, should you upgrade? Well keep reading and grab your wolfsbane, not to mention your silver bullets, because were going deep into werewolf country.

Everyone’s favorite mom in the 80s, or at least mine, Dee Wallace, plays a news reporter named Karen White on the trail of a viscous serial killer. In a move that is far more brave than smart, she meets with him in a scuzzy porn shop/theater where things get hairy (hah) and the killer named Eddie is shot down like a dog (hah again). Traumatized by the events, and repressing a memory best left forgotten, she goes to a wilderness retreat with her husband (bit of trivia: at the time Dee and actor Christopher Stone were really married) that’s overseen by a psychologist guru played to perfection by Patrick Macnee. Unfortunately, instead of some much needed rest and relaxation, she finds werewolves. Hey, that’s not a spoiler, you knew this was a werewolf flick when you started reading this.

Now just in case you have yet to see this movie, that’s all the plot I’m going to give you here. If you haven’t seen The Howling, then you really, really should. I will say there’s a bit of a mystery as to who is a wolf in people’s clothing and who is not, some of the director’s trademark black humor, some decent gore for the splatter fans, and a werewolf transformation that’s probably just below the amazing, Oscar winning one in American Werewolf in London. Unlike many horror movies, the acting is all topnotch here by seasoned pros, not just twenty-somethings playing college kids being chased by a masked man with a knife. Besides the always delightful Dee Wallace, standouts include Robert Picardo as werewolf Eddie, Kevin McCarthy as the boss of the TV station, John Carradine as a crazy old coot, and Slim Pickens as a downhome sheriff. Honestly there’s not a bad actor in the bunch here. Then there is the more than capable direction of Joe Dante showing the skills that got him to head up Gremlins three years later. I like Gremlins, and many of Mr. Dante’s movies, but this is by far my favorite flick from the filmmaker.

So the movie is an undeniable werewolf classic, but how is the new Blu-ray from Scream Factory? Well like all of the releases from that wonderful workshop of shrieks, this BD does not disappoint. In addition to The Howling looking amazing in HD, there are a bunch of extras and goodies on here to howl about. There is an audio commentary with director Joe Dante and actors Dee Wallace, Christopher Stone, and Robert Picardo. There is a second commentary track with the author of the original novel, Gary Brander. There is a nearly 50 minute long retrospective featurette from a few years ago that made the jump to this new Blu-ray called Unleashing the Beast” that was very informative. There’s an 18 minute interview with producer Steven A. Lane. Another with editor Mark Goldblatt that runs 11 minutes. Co-writer Terrence Winkless gets to tell his story in just over 12 minutes. There’s a “Horror’s Hallowed Grounds” special about the locations where the movie was made. There is a short, less than eight minute long, behind the scenes piece that was filmed right when the movie was being made, so we’re talking about 1981 or so. There in an interview with stop motion animator, David Allen, that runs nearly nine minutes long. There are deleted scenes with optional director’s commentary for them. Outtakes, the theatrical trailer, and photo gallery are also found here.

The Howling is one of the best werewolf movies ever made. If you’re any sort of horror fan at all then you already know this because you’ve already seen it. Well here it is, the first time on Blu-ray, looking better than ever, and packed with extras and goodies. However, if you are a young horrorhead who have somehow never seen The Howling, well now is a great time to rectify that huge oversight and see how good werewolf movies can be done. Consider this release far beyond recommended. It is a mandatory must have for any lover of lycanthropes, or fan of fright flicks in general.