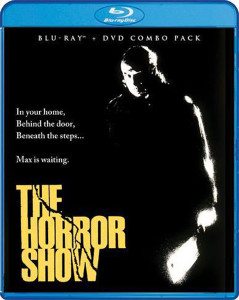 Have you ever seen House III? You know, first there was the pretty good original House movie from 1986 starting the Greatest American Hero vs. a Vietnam vet’s ghost. Then there was the somewhat forgettable, time-trippy House II. And in 1992 they made the even more forgettable House IV, but what about House III? Well if you live in the U.S. then you might have seen that movie and never known it, because that movie is this movie. Yes, The Horror Show is House III in many parts of the world, just not here, and for good reason, since it has NOTHING to do with either of the House movies that preceded it. Oh sure, it has a house in it, but that’s about all. OK, useless bit of trivia aside, let’s get to the meat of this new Blu-ray release from the mighty and prolific Scream Factory.

OK, so there is this creepy, always laughing serial killer who has killed an astronomical number of people, or so the film tells us in some very forced exposition. He is nabbed by the cops early on and sentenced to fry in the electric chair, which he does. But that doesn’t do a thing to stop his carnage. Instead the killer’s twisted soul becomes electrified, as the psychopath was already taking great pains to survive his inevitable sit down in ‘Old Sparky’, and now the killer creep uses electricity to jump around and take his revenge out on the person that put him in the chair.

Now before you ask, no this is not the plot to Wes Craven’s better known fright flick, Shocker. OK, it is the plot to that movie, but it is also the plot for this film. And what’s more interesting is that both this movie and that other one came out in 1989. So as to which flick might have copied the other, who knows. But on with the Horror Show.

The killer in this movie is Brion James, perhaps best known as the non-Rutger Hauer killer android from Bladerunner. The cop that captures him and thus incurs his undead, electrified wrath is Lance Henriksen, perhaps best known as…well a million and one other genre films. Come on, just pick one: The Terminator, Aliens, Pumpkin Head, Near Dark, and on and on the list goes. Anyway, Lance nabs Brion, here playing a giggling psycho with the awesome name of Meat Cleaver Max Jenke. After Jenke gets fried, he electro-shoots over to Lance’s house and sets ups shop in his furnace because why the hell not. Once there, he starts making Lance’s life a living hell by giving him messed up nightmares and even waking visions in an effort to drive him crazy. And you know what? It works. Soon Lance is shooting the TV Elvis style, stabbing the hell out of the Thanksgiving turkey, and possibly even murdering his teenage daughter’s boyfriend. OK, we the audience know he doesn’t do that, we see the ghost of Meat Cleaver Max do it, but the other characters in this movie don’t know that.

The vast majority of the fun from this flick comes from the weird, wackiness Jenke inflicts on Lance’s poor, hapless cop. I won’t give any of those bits away, but they range from laugh out loud funny, to a few that are actually quite creepy. The rest of this movie, and quite frankly, the rest of this cast, is largely disposable. Well, Thom Bray as the nerdy scientist who knows that’s going on is pretty good too, but the rest are just kind of there. This film is all about Lance Henriksen and Brion James playing off each other and hamming it up like there’s no tomorrow, and I loved that.

The new Blu-ray/DVD combo pack from Scream Factory not only has the movie looking better than ever, but it comes with a few nice extras too. There is a commentary track with producer Sean S. Cunningham. If that wasn’t enough of a Friday the 13th connection for you, there is an 11 minute interview with Kane “Jason” Hodder who was the stunt coordinator for the movie. There is also an 11 minute interview with actress Rita Taggart who played the mom in this movie. Rounding up the goodies is a theatrical trailer.

The Horror Show is not a great movie. In fact it is downright cheesy as all get out. But it is because of that cheese that I liked it so much. It is a fun as hell flick, well-acted (albeit at times a bit over acted) by Lance Henriksen and Brion James, and there are even a few creepy scenes in it, which is more than what I can say for Wes Craven’s similar Shocker movie. As a House III movie it utterly fails, but as The Horror Show it’s pretty damn good. Consider it recommended.