The Hobbit: The Desolation of Smaug – Blu-ray review 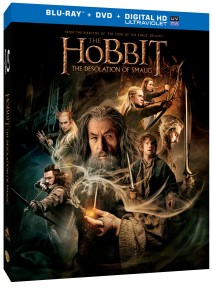 The Hobbit: The Desolation of Smaug

Yes, this isn’t horror, but it’s Tolkien, and that will always get a free pass from me. It also has murderous maniacs in the form of orcs that are every bit as terrifying as any slasher, not to mention a genocidal dragon and even the undead tossed in for good measure. So yeah, I think this movie can find a home here, but the question is; is it any good?

You see, while I loved all three of the Lord of the Rings movies, I didn’t like the first Hobbit movie all that much. I didn’t hate it, but with its overlong runtime and way too overstuffed feeling, combined with the silly bits (dwarves dancing, singing, and plate-throwing) that really didn’t sit right with me, I just sort of tolerated it. The fact that Peter Jackson and co. took a rather simple story and stretched it to the breaking point to make three films out of what really should have been one, all in the name of the only quest they seem interested in, raiding your wallet, really put a foul taste in my mouth for that first movie.

That icky feeling returned when it came time for me to watch this sequel. But then I watch it, and while I still think it is a bit too padded, I enjoyed Smaug a whole hell of a lot more. Gone were the out and out stupid bits, increased was the emphasis on the action, and that’s how I prefer my fantasy. Give me swords and fighting over singing and dancing any time.

Oh, and spiders. I do love me some evil spiders, and that’s where this movie starts off. Bilbo and his dwarf friends are beset by a horde of evil arachnids. Naturally they make it through that (there’s still a lot of movie to get through) but there is a lot fantasy goodness to be had in that scene. Then the weary travelers meet the elves, but they’re not the nice, helpful elves you might expect from the previous movies. No, these guys are all full of attitude. Even the return of a future hero (as the LotR’s movies come after this one) seems different as the dainty death machine, Legolas, seems a bit emo as he is locked in a love triangle between himself, Evangeline (Lost) Lilly’s equally badass lady elf, and one of the dwarves. While this bit also seemed like padding, and it is, it was at least done well.

There is a sidetrack quest by Gandalf to a haunted castle that’s sadly nothing but a tease for the third movie, and a trip to the floating human city of Laketown to show that mankind is no better than all of the other squabbling races in Middle Earth. Then, at long last, it’s dragon time, and as an old nerd that has tossed more than his share of d20s in his time, this is where this movie excelled. Not only did Smaug look resplendent and intimidating in all its CGI glory, but having Benedict (Sherlock) Cumberbatch voice him was a stroke of genius. And no, not just because Bilbo is played by Sherlock’s Watson, Martin Freeman, and the whole thing sort of had a surreal aspect to it if you’re a fan of that British TV show, as I am. Sadly, this epic confrontation, like the aforementioned haunted castle bit, is left off as a cliffhanger and not satisfyingly resolved here. Boy, am I so glad they broke up this short novel (my 50th anniversary edition is less than 300 pages, and that’s with plenty of illustrations and big print) into three movies.

The new Blu-ray, DVD, digital combo pack from Warner Bros not only looks and sounds amazing, as you would expect from such a big budget, effects heavy movie as this one, but it comes with a collection of extras. On the Blu-ray you will find “New Zealand: Home of Middle Earth” which is pretty much nothing more than a seven minute tourism video. On a second DVD are all the rest of the extras. “Peter Jackson Invites You to the Set” is exactly what it sounds like, a bunch of behind the scenes bits and interviews cobbled together that runs a meaty 40 minutes long. There are an additional 36 minutes of production videos presented in a vlog format. Lastly there is a collection of 6 trailers. While these special features aren’t bad, there is a tangible feeling that most of the best goodies are being held back for the inevitable special extended edition that you know is right around the corner.

The Hobbit: The Desolation of Smaug is a much better outing than the previous movie. It’s more action packed, has more grand moments, and even if it was still overstuffed, it was an enjoyable, fantastical ride. My biggest gripe with it is that as a standalone movie, it is sadly incomplete. As a middle part of a meticulously planned trilogy, it delivers the goods and does whet the appetite for what’s to come. If you’re a fan of Tolkien, and especially of Peter Jackson’s take on Tolkien, then you’re going to want to watch this movie. Hell, you probably already have your copy preordered. So to all the fans of Middle Earth, consider it well recommended.