The Heart Does Not Grow Back – Book Review 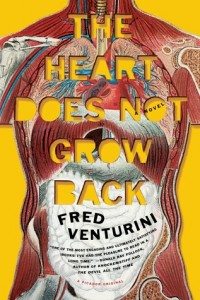 The Heart Does Not Grow Back
Fred Venturini
Picador
November, 2014
Reviewed by Josh Black

I first came across Fred Venturini’s writing in the Burnt Tongues anthology. He had a great story in it, and I wondered what a full-length novel from him would be like. As it turned out, his debut had come out in 2011. Originally published as The Samaritan through small press publisher Blank Slate Press, Venturini’s The Heart Does Not Grow Back is getting the chance, through Picador, to reach a wider audience. While it won’t appeal to everyone, its hard-nosed approach to the fantastic does a good job bridging the divide between genre and lit-fic.

The Heart Does Not Grow Back details the life, from childhood through the early twenties, of Dale Sampson. Dale is an outcast from the start, his early school days filled with misery. If he’s not being ignored he’s being tortured, and sometimes it’s not exactly against his will. He particularly wants female attention, and doesn’t let humiliation get in the way of his attempts to get it.

Dale befriends Mack Tucker, a wild card and male chauvinist, and finds himself with an actual social life, but this doesn’t last long. Things spiral quickly downward into a blood-soaked night that sees both Dale and Mack injured and Dale’s crush dead. Amidst the devastation, Dale discovers that his body can fully repair itself – limbs and all.

Naturally this leaves Dale a broken man. He lives alone, suicidal and directionless, until one day he sees someone from his traumatic past, and everything changes. She’s broken too, albeit in a different way. Dale falls hard, and makes it his mission to save her.

From here things go in some unexpected directions encompassing religious fervor, media frenzy, and covert government organizations. As selfless as his actions seem, Dale’s masochistic streak is strong, and he ends up punishing himself for imagined wrongs as much as he attempts to atone and to save the “damsel in distress”. Many of the things he does are horribly misguided, and although Dale can’t see it, the reader can. This makes it a difficult novel to read at times, which isn’t necessarily a bad thing. The ill-fated and aggravating love story aspect reminded me of Maugham’s Of Human Bondage, although the intensity of the obsession in this novel makes sense, considering Dale’s past.

The Heart Does Not Grow Back is a powerful look at the effects of grief and obsession borne from shared trauma, told through clear and lyrical prose. As dark and somber as things get, it’s often a touching read. Dale maintains a sort of innocence when it comes to relationships that belies his troubled mental state, and the novel ends on a hopeful note. Well worth reading for fans of literary fiction, noir, and crime, but anyone seeking something unique should check this one out.