The Hans Continues To Spread Like A Z.T.D. (Zombie Transmitted Disease) With Launch Of Official Movie Website! 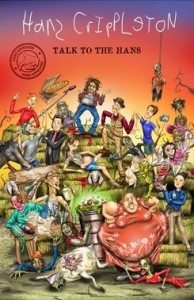 Heart and Fire Productions today announced the launch of their official movie website for the upcoming horror/comedy feature film titled Hans Crippleton: Talk to the Hans (www.hanscrippletonmovie.com). With the film’s first screening selling out two theaters at the Alamo Draft House, audiences were roaring with laughter at this outrageous zombie comedy. As the film continues to gain momentum, you can visit the new website to follow the movie’s progress and join their mailing list for exclusive content, updates, information on upcoming festival screenings and more.

“The website will complement the zany humor of our film,” said Jimmy Lee Combs, director of Hans Crippleton: Talk to the Hans. “We want to entertain our audience beyond the film, so in the coming months, not only will you be able to purchase the film digitally through our site but we’ll also be expanding the film’s universe through comic strips, videos and more to keep our fans satisfied. Plus, we’ll be offering fan exclusive content to those who sign up for our newsletter.”

With an eccentric cast of characters, amazing SFX and outrageous story, Hans Crippleton: Talk to the Hans introduces us to a backwoods family plagued by a mysterious zombie curse. Enter Barnaby Hunt, host of Horror Hunts, a show dedicated to bringing you the story behind horror legends, supernatural occurrences and the macabre. We find Barnaby on Sukkin Booz farm which is inhabited by Hans Crippleton and his inbred family members.

Barnaby and his camera crew are swept into the backwoods ways of this disturbing family and are along for the ride as they uncover the mystery behind the Crippleton family zombie curse. Hans Crippleton (the leader of the pack) is the star of the show as we witness his rise and fall from fame. And let’s just say he gets into a lot mischief with his little hand and proud hump. Some may fear for their life when encountering the Crippleton’s because…well let’s be honest, they look like they would eat the flesh right off your bones, but for those who get to know them, you may just find out you’d like to stick around for the boozin’ and floozin’.