The Hand That Feeds – Book Review 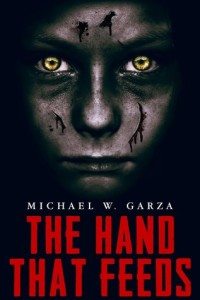 The Hand That Feeds

When John Mason’s son Alex stumbles upon a tunnel where he is covered in muck, his life changes in a way he never could have seen. As Alex fights for his life, John’s wife Angela frantically tries to save him. But when Alex succumbs to whatever has invaded his body, Angela loses her grip on what little sanity she had left.

The grieving parents wait a while before calling the doctor to have Alex taken away. As John makes the call, his wife screams for him to look at Alex – he isn’t dead after all; he’s moving and moaning. John knows something is terribly wrong, but Angela won’t hear of it. Her baby is alive, and she is going to do everything she can to keep him that way. And because John was afraid of losing his wife as well, he goes along with what Alex needs – at any cost.

When Alex’s parents realize he needs live flesh to keep him from “dying,” they plot together to lure people to their home and feed them to their son. But after one of their victims gets away after  being bitten by the boy, all hell breaks loose. The zombie disease is now tearing through town, and John knows it’s his fault. However, his wife won’t let him shirk his responsibility to his son to keep him fed, leaving John to fight for his family’s life as well as his own, at the same time trying to feed his son.

I love a good zombie story, and this is definitely one of the best I’ve read. Well-written and suspenseful, the story keeps the reader guessing. It’s a fun read, with twists and turns and disgusting scenes. The ending was a surprise to me, and made me wish there were more to read, or a sequel to come.

Not your usual zombie story, The Hand That Feeds is a fresh look at the popular sub-genre, and a great one at that.