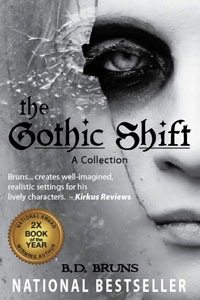 I love Gothic horror.  So much of it is based on the anticipation of fear. A sense of dread and foreboding that is paired with secrecy, hidden walls and doors, and madness suppressed under layers of breeding or civility.

Many people see it as quiet, because in some Gothic work there is little blood splatter or vicious displays of squicky violence. It focuses on atmosphere and that unsettling feeling stays with you, like a demon reading over your shoulder. The setting is so much a character itself in the Gothic: isolated castles, abandoned sailing vessels, haunted mansions.

Atmosphere defines Bruns’s Gothic Shift collection. He spends time crafting the setting in each of these four tales, without making you feel weighted down with description. His deft hand at creating settings likely stems from his years as a travel writer, having seen and experienced numerous locales. I was able to feel a part of each area, especially the historic ones.

A bit about each story:

The Ghost Of Naked Molly is by far the most polished in the collection and earns its place as first. You are immersed in the scheming of Diego del Gilbrafaro as he attempts to become the main political player in the city. However, the ghost of a slave mistress (and Diego’s partner in crime’s obsession with her) makes these dealings harder. I winced at not only the treatment of slaves in this story, but also the descriptions of the owner’s mindset, which to me as a Black female was all the more chilling. While it was harsh, it wasn’t overworked. The ghost herself does not acknowledge the Señor at first, leaving first his sense of entitlement, then his sanity in shreds.

The Swamp Hive was the story I felt was less finessed than the others. But that could have been the voice of the main protagonist, who is portrayed as, well… a bit slow.  But Frank, a cook for the Confederate army while it breathes its last, is a sympathetic character and grows immensely from the ordeal he puts himself through.

Blue Caribou had the most isolated, desolate setting.  Trapped on a ship in the icy Arctic far off course with no hope of rescue, is it any wonder that the crew begin to turn on each other? Bad decisions lead to suspicion, and that suspicion leads to bloodshed.

The Gothic Shift is the least traditionally gothic of the four, but I liked its quirky strangeness.  A faithful customer of an all you can eat buffet comes in daily to eat massive quantities of shrimp, but it is his waitress that gains the weight. Bruns makes this a dark fantasy tale more so than horror. By not being forthcoming with every detail, which I like, it becomes a dark fairy tale involving a beautiful girl that through no fault of her own becomes the focus of a strange magical creature masquerading as human.  You don’t know exactly what the customer is or is going to become, but you’re glad you don’t wait tables at that restaurant.

I enjoyed the subtleties of this collection and I’m even more pleased to see a collection of Gothic horror. Each story even had a picture or drawing to accompany it, which helps you to imagine Bruns’s vision for these tales. The stories in this volume are little nibbles at the edges of your mind that show the Gothic style can resonate with even hardcore horror lovers.