The Girl from the Blood Coven – Book Review 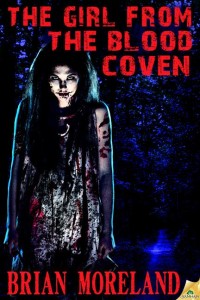 The Girl from the Blood Coven

In the summer of 1972 in East Texas, Sherriff Travis Keegan gets a report about a girl in a pasture. He doesn’t take it seriously at first but as this is small-town horror at its finest, the reader knows right away there’s more than meets the eye to this situation. He walks into a bar and we learn more about his backstory including that he’s into Sheila, the female bartender, and he would ask her out if she weren’t so much younger than him, his wife left him, and he’s lonely.

Soon after, a blood-soaked woman walks into the bar with no wounds, as the blood belongs to other people. Her name is Abigail Blackwood and she claims something broke into her house and killed her family. Trouble is, she’s from the Blevins house, a coven run by a witch named Lenora Ravenmoon Blevins who is known for taking in strays, including Abigail. Travis thinks the house residents are a bunch of hippies and that Abigail is a witch, but nevertheless is obligated to investigate despite his misgivings.

He thinks she was suffering from hallucinations as a result of drugs, but still can’t explain why she was covered in blood, which leads him to believe that she may be the culprit and that she’s a devil-worshipping witch. Before he can confirm his suspicions, we find that the Blevins house is hiding more secrets than we thought.

For horror fans wanting a healthy dose of the small-town stuff a la Stephen King, be sure to pick up a copy of this memorable and frightening short story, a wonderful teaser that will whet your appetite for the main course, The Witching House, where the twisted story continues.