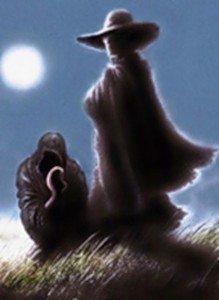 A cult author of supernatural stories and a master of “quiet” horror, British reverend M.R. James still represents an inspiration and a model for modern writers of elegant, classy dark fiction.

A previous volume of “The Ghosts & Scholars Book of Shadows” attained critical acclaim by assembling a number of delightful new tales intended as prequels or sequels to some of the most famous M.R. James stories. Encouraged by the extraordinary success of the first book, editor Rosemary Pardoe and publisher Robert Morgan have produced a second volume of similar material.

The present anthology features twelve brand new Jamesian stories penned mostly by British authors (after all, M.R. James was a Briton himself and the atmosphere surroundings his body of work is unequivocally British).

If you’re afraid that the bulk of the included material is represented by mere Jamesian pastiches rest assured that this is not the case. The contributing writers did a great job, getting inspiration by the M.R. James stories but developing plots and characters in their own ways.

Among a bunch of good stories, some really stand out.

“The Sands o’ Dee” by Peter Bell is the painstaking report of dark events from a foggy past, in the true Jamesian manner of a devoted antiquarian, while “11334” by C.E. Ward is an excellent, traditional ghost story about a haunted property, told in a refined narrative style, but apt to elicit a lot of shudders.

Reggie Oliver contributes the powerful “Absalom”, a spellbinding tale of debauchery, damnation and vengeance from the other side of the grave.

In the truly Jamesian tale, “The Desecrator” by  Derek John, an ancient family curse brought about by necromancy affects the last descendant of a disreputable family .

Helen Grant’s very horrific “The Third Time” revolves around an unlucky inheritance including the burden of a deadly legacy.

Published in a limited edition of 325 copies, this delicious book will greatly please any fan of horror fiction based on subtle disquiet rather than gore and violence.