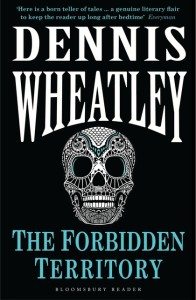 Dennis Wheatley needs no introduction to fans of horror and suspense literature.  Wheatley’s prolific output of adventure novels – many involving elements of the supernatural and Satanism – was immensely popular for decades but has been much less readily available in recent years.  This is the first volume in a new set of attractively bound trade paperback reprints by Bloomsbury Reader.  Cover designs for the series are minimalist, but striking, and I hope they are effective at drawing in new readers.  Because much of Wheatley’s work has been available only in increasingly hard-to-find out of print editions – at least in the U.S., I assume he is more readily available in the U.K. – this is a very welcome addition to the shelves.

Published in 1933, THE FORBIDDEN TERRITORY was Wheatley’s first published novel and unlike some of his later works that delve deeper into occult topics, Satanism, and more lurid themes, it is an unabashed adventure novel.  It also introduces four of Wheatley’s recurring protagonists: the elderly but still spry French exile, the Duc de Richleau; the wealthy Jewish banker, Simon Aron; the brash young American adventurer, Rex Van Ryn; and well-connected, upper-crust Brit, Richard Eaton.  Though it lacks the supernatural elements of some of the later novels in the series, it does introduce the protagonists who will go on to have more occult adventures, and highlights Wheatley’s skill at penning a darn good adventure story.  I should also note that the book became an immediate best-seller in 1933 and Alfred Hitchcock bought the film rights.  Though Hitchcock himself doesn’t seem to have been involved in making the film adaptation, a movie based on the novel came out in 1934.  I haven’t yet seen that film, but while it seems to have taken some liberties with the plot and characters, is still favorably reviewed and said to be one of the better screen adaptations of Wheatley’s fiction.

The plot of THE FORBIDDEN TERRITORY seems pretty straight-forward: Rex Van Ryn has traveled to the Soviet Union seeking a hidden tsarist treasure and, unsurprisingly, has fallen afoul of the authorities.  He has been imprisoned in a Soviet prison in a remote area but eventually manages to get word of his capture to his friends, chief among them the mysterious old exiled nobleman, the Duc de Richleau.  The good duke, along with two of Rex’s other friends, make their way into the Soviet Union, managing to shake their Soviet minders, then they have to locate Rex, somehow get him out of a Soviet prison, then escape several thousand miles to the West, all the while evading a massive manhunt.  Then things get complicated.  I don’t want to spoil all the twists and turns, but we have here all the elements of a great action-adventure novel: a femme fatale; wining, dining, and high society; a relentless, ruthless secret police officer; deposed noblemen and a hidden treasure; military secrets; spies, lies, and betrayal; car chases, shoot-outs, and countless cliffhangers; and an omnipresent sense of danger.  Suffice it to say that THE FORBIDDEN TERRITORY provides almost a blueprint for how to compose a thriller.

We tend to think about the Soviet Union and its relationship with the West in terms of the Cold War, but THE FORBIDDEN TERRITORY makes clear that the first Red Scare was alive and well in 1933, with the Soviet Union very much an enigma, albeit a fascinating and frightening one, for the West.  This is also an interesting look at Stalin’s Soviet Union before the Second World War, at least as it was imagined (and feared) by some in the U.K. in the early 1930s.  This is a staunchly anti-Communist vision of the USSR; unlike at least some of his upper-crust peers, Wheatley was not one of the many British intellectuals who flirted with socialism, or even active supported for the international communist movement in the 1930s.

THE FORBIDDEN TERRITORY is definitely recommended as a rip-roaring action/adventure thriller from the early 1930s that is decidedly better written than most adventure pulps from the same period.  It’s also a great introduction to some of Dennis Wheatley’s most iconic characters.  My only caveat would be that if you’re expecting explicitly supernatural elements – as found in some of Wheatley’s “black magic” works – you might be disappointed that those elements aren’t present here.  But as a straight historical thriller, this one is hard to beat.