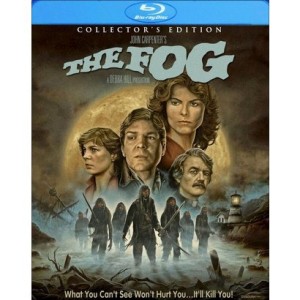 John Carpenter. The Fog. Special edition Blu-ray from the amazing Scream Factory. Do I really have to sell you on this? I didn’t think so. Goodnight, everybody. Drive safely and don’t forget to tip your waitresses before you go.

What, are you still here? Really? It’s The Fog looking better than ever before and loaded with an extras. Go get it.

Oh alright, let’s do this thing.

If you are a lover of horror movies then chances are you’ve already seen The Fog. And no, I do not mean that god-awful 2005 remake staring teenage Superman that was one of the worst p.o.s. flicks I’ve ever seen. Thankfully that movie is now against the Geneva Conventions for anyone to watch. One small victory for human rights, but back to this review.

I’m talking about the 1980 original, the third theatrical film written and directed by John Carpenter. This movie falls right between his ground breaking Halloween and his simply amazing The Thing. That’s back when he was still a true master of horror (or just a master of awesome movies) and The Fog is thick (zing) with atmosphere and dread. It’s a classic story about the dark secrets of a town and how the restless dead come back one hundred years after a tragic travesty looking for revenge. It is the beautiful and eerie looking fog that sets this film apart from many other vengeful spirits movies. It is an amorphous evil that can squeeze through even the smallest crack, completely engulf you, obscures your vision, and you just can’t get away from it. As if that wasn’t enough reason to watch this film, it has genre favorites Adrienne Barbeau, Jamie Lee Curtis, Janet Leigh, and Tom Atkins in it, not to mention Hal Holbrook as one badass boozing priest. All that combined with Carpenter’s always spooky soundtrack, and you’ve got a hell of a creepy movie that still delivers the goods 33 years later.

But again, you know all that, right? Yeah, I thought you did. So let’s get to what makes this new Blu-ray from Scream Factory worth a buy.

First and foremost, let me first say that man, does this movie look great in high def. I’ve always been happy with the quality of all of Scream Factory’s releases, but this one really stood out to me, especially for the foggy scenes, and in a movie called The Fog, you can bet there’s a lot of those. This is easily the best this film has ever looked. As for the extras and special features, there are a bunch to be found here. Some of them are ports for the previous DVD edition, but at least nothing has been left behind. I hate it when BD/DVD companies do that. There are also some new goodies here as well. There are two audio commentaries, one with director John Carpenter and his longtime writing and producing partner, and onetime significant other, Debra Hill. The other is with the actors Adrienne Barbeau, Tom Atkins, and production designer Tommy Lee Wallace. There is a brand new and lengthy interview with actress Jamie Lee Curtis that runs 21 minutes and covers not only The Fog, but Prom Night, Terror Train, Halloween 2, and more. There is an 18 minute interview with The Fog cinematographer Dean Cundey. There are three featurettes on here: a classic one from the 80s called “Fear on Film” that’s about 8 minutes long, “Tales from the Mist: Inside the Fog” that is more recent and runs 28 minutes, and a short storyboard to screen comparison. There’s an always entertaining “Horror’s Hallowed Grounds” segment about all the real world places where The Fog was shot that’s just over 20 minutes long. I always love watching these H.H.G. bits created and hosted by Sean Clark. Outtakes, special effects tests, trailers, TV spots, photo a gallery, and a collection of storyboards round out this very impressive list of extras. Oh, and here’s a heads up: there just might be an Easter egg or two hidden on this disc somewhere.

The decision on whether or not to get this new Blu-ray edition of The Fog his a no-brainer, folks. It’s John Carpenter when he was still at the top of his game, a classic ghost story, a bunch of great actors, a beautifully shot film, a creepy and atmospheric movie, a great Blu-ray transfer, and the usual bunch of extras and special features that Scream Factory likes to bring to the party. This is a must own release for any and all horror fans. Get your copy when it comes out on July 30th.