The Empty House & Other Ghost Stories/The Listener & Other Stories 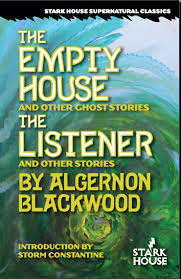 There’s something the old school of horror has that lacks in some of the stories of today. No, it’s not words like “nilly willy” or “higgedly-piggedly”, it’s the presence of genuine fear, of a story that can slip its way unnoticed through the shadows and pounce upon you, its prey, when you least expect. We’ve become so desensitized to the blood and guts of the genre today that we’ve forgotten that some things can plainly and simply scare the pants off of you with nothing more than a pale face emerging unexpectedly from the shadows or that feeling you get when you know someone – or something – is crouched outside your bedroom door late at night, listening to your every move.
First released as separate titles in 1906 and 1907, The Empty House & Other Ghost Stories/The Listener & Other Stories is a compilation of the great Algernon Blackwood’s first two short story collections ever published, brought back to life for the masses of today by Stark House Press.
After a brief introduction from dark fantasy scribe Storm Constantine, the collection begins on a good foot with The Empty House, a story about two amateur ghost hunters and a house that’s not as empty as it seems. Within those first thirteen pages, the haunting mood Blackwood beautifully instills sets the tone for the rest of the book, hinting that the worst (or the best, depending if you’re a glass half-empty, glass half-full kind of person) is yet to come. Also included in the first part of the collection are A Haunted Island, A Case of Eavesdropping, Keeping His Promise, With Intent to Steal, The Wood of the Dead, Smith: An Episode in a Lodging-House, A Suspicious Gift, The Strange Adventures of a Private Secretary in New York and Skeleton Lake: An Episode in Camp.
Part two of the collection begins with The Listener and includes Max Hensig – Bacteriologist and Murderer, The Willows (one of Blackwood’s most well-known stories), The Insanity of Jones, The Dance of Death, The Old Man of Visions, May Day Eve, Miss Slumbubble – and Claustrophobia and wraps with The Woman’s Ghost Story.
All of Blackwood’s stories are character-driven; the protagonist is our tour guide, bringing the reader along on what’s often a not-so-pleasant journey, but that usually ends on good terms. Blackwood’s skills as a story-teller keep the reader entwined; his use of imagery is just enough for your mind to fill in the rest. I did notice that some of the works in this collection use a similar background to get the tale off the ground: our protagonist has a career that has him keeping random hours, be it a journalist or student. He finds the cheapest possible room to rent at a boarding house, spending his time in the room studying or sleeping, and wondering how he could’ve possibly attained a room at such a great rate. What the man then discovers, as the story progresses, is the answer to his question and the result is always chilling. Although this formula is used as the backbone in several stories throughout the collection, Blackwood’s finesse for the macabre and the strange presents a unique take in each story, like having one puzzle with many terrifying solutions.
Any fan of horror fiction should be familiar with a man whose influence still lingers today. H.P. Lovecraft, Ramsey Campbell and Caitlín R. Kiernan are some of the many writers influenced by Blackwood’s tales of the weird. By no means is his work an easy read, especially when you’re accustomed to more modern fiction, but from challenge often comes reward, and you’ll be glad you took the time to immerge yourself in such a fantastic collection of short stories that may even inspire you to pen a few ghostly tales of your own.
If you’re not familiar with Algernon Blackwood, what better time than now to become acquainted with the man many consider a master of supernatural fiction?