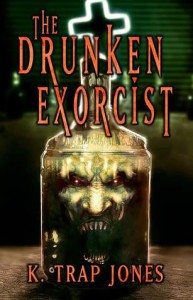 A friend of the devil is not a friend of Father Schnitt.  Schnitt is the non-conformist titular character in K. Trap Jones’ The Drunken Exorcist, and he has a means of extracting demons that puts him at great odds with the church.  Unlike the priests that horror fans are familiar with from The Exorcist franchise and other tales of demonic possession, Schnitt has little to no concern for the person possessed.  He will extract the demon at any cost, leaving behind violently dismembered and disemboweled “hosts.”

Another difference between The Drunken Exorcist and other fictional tales of hellish fiends is that the former does not take itself too seriously.  Especially in film, tales of demonic possession are often coupled with warning labels: don’t play with Ouija boards, don’t mess with burial grounds, be pure, be spiritual. Trap’s tale is a welcome relief.  The possessed have done nothing wrong; there is no moral judgment, no grandstanding on soap boxes. The tale is meant to be consumed as entertainment, and it fulfills its purpose.

The Drunken Exorcist is written as journal entries documenting episodes in which Schnitt performs exorcisms.  His method revolves around the use of whiskey—hence the title—and gives new meaning to the phrase “liquid courage.”  Through trial and error, Schnitt discovers that only whiskey works (and may God have mercy on the soul of the uninformed exorcist who attempts an extraction using vodka).

The possessed that Schnitt encounters read like a who’s who of reality TV: Doomsday preppers, little people, hoarders. I would have enjoyed a Real Housewife or two, but they are probably evil enough without the added ingredient of demonic possession.

One has to feel sorry for Schnitt: not only can he see demons (a gift or a curse that most folks don’t have), he also has to use the whiskey as a mental crutch in addition to a physical repellent.  By dousing himself in the intoxicant, he is able to prevent the demons from attempting to enter his body.  By swallowing the potent inebriant, he is able to find a numbness to escape the reality of the violence that is a part of his regular life.  Exactly how regular needed explanation: the entries could have benefited from dates to specify how much time elapsed between his fiendish encounters.

The Drunken Exorcist is short (it begins on page 9 and ends on page 92) so there was not much room for character development, yet Schnitt is fully realized.  He is an interesting priest: he does not speak in scripture—he curses and quips and shoots off some really wonderful one liners as he dispatches demons.  His voice is a compelling one and each individual episode with a possessed soul reads like both a short story and also a continuation of the overarching narrative that deals with the hows and whys of Father Schnitt’s probation.

The hoarder, aka “the Messy One” was one of my favorite episodes.  The description of the cat and mouse game between Schnitt and the hoarder was amusing and unique.  As a college professor, I also enjoyed “The Smart One”.  I found myself wishing it were longer.  I wanted to know more about the creepy professor and his perverse inclinations.

There is enough splatter mixed in with the satirical tone to give horror fans their fix.  Besides the few distracting spelling errors, the text was well written and the story line progressed smoothly.  Trap is a savvy writer:  he knows how to grab readers and how to keep them.  The Drunken Exorcist is fun and funny and a thoroughly enjoyable read.