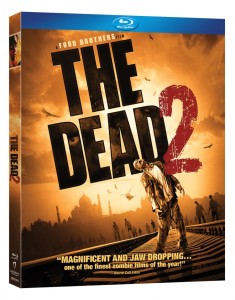 I loved the first The Dead movie. It was a return of the slow, creeping, unescapable doom that are my favorite kinds of zombie films. That it was well written, acted, and directed was just icing on the already tasty cake. The fact that the film looked absolutely, amazingly, unbelievably beautiful, being shot in Africa and using that continent’s stark beauty as a backdrop for the horror, was all the fancy-wrapped presents that go with a cake. So it was with high expectations that I tore into The Dead 2 when the Blu-ray was sent to me Anchor Bay.  Were those expectations met, or was this an example of the dreaded sophomore slump from the writer/directing Ford Brothers? Well let’s find out.

This time around the action is moved to India, which has got to be one of the worst places to be in during a zombie apocalypse, with its huge population and all. Sadly, this movie doesn’t really delve into that aspect, which I thought was a big oversight. What it does take advantage of is India’s natural beauty, so the sequel does continue with the awesome visual ascetic from the first movie. Sadly (again) that’s about all The Dead 2 has going for it. The story is pretty simple: an American is working in that far off land when the zombie plague hits. He has an Indian girlfriend who is with child, so that is his motivation for crossing hundreds of undead-infested miles. Along the way he picks up a local orphan kid who pretty much steals the show every time he’s on camera, and that is coming from a guy that normally doesn’t like child actors. Together the two make their arduous trek across a beautiful landscape, running into the police/military as it tries to deal with the outbreak…and I’m sorry, but was I talking about The Dead or The Dead 2? I forgot…

Look, this isn’t a bad movie, but it does have an undeniable sameness to everything about it. Okay, it’s a sequel, so a bit of that is to be expected, but rarely have I experience such a feeling of “oh, more of this, then” than I did while watching this movie. The biggest condemnation against it is that it did nothing new. Whereas the first film had its great cinematography and the return of the slow, creepy dead to set it apart from most of the modern zombie flicks being made today, this one just has more of that, and nothing else. Something more should have been done to warrant this sequel being made, but it never was.

That said, The Dead 2 is still an enjoyable zombie romp that is well made, acted, and has a few good gory bits for the splatterpunks to enjoy. There are some eye-rolling coincides in it that left me laughing when I ought not to be, including the biggest howler; one involving a little, ragged doll and how that comes to an end. That bit of silliness added nothing to the story, other than groans from the audience, and it really made me wonder what the brothers Ford (the writing/directing sibling due behind both of The Dead movies) were thinking when they came up with that idea. Still, overall that was a minor bit, and since I pointed out that disappointing yin, let me talk about one of the excellent yang moments involving our hero, a gun, and a trapped mother and daughter. I love that this movie didn’t pull any punches and has such a dark and effective moment in it. If only the rest of this movie was that good.

As for the extras on the new Blu-ray release, there are sadly only a few. There is a half hour long interview with the Ford brothers, bolstered with some behind the scenes footage taken on location in India. Other than that, there is a collection of deleted scenes, and that’s it. Even the always available trailer is missing here, which I found quite weird. So like the film itself, the extras on here aren’t bad, but they could have been better.

So, The Dead 2 wasn’t really bad, but it was a letdown as a fan of the first one. While it does nothing technically wrong, other than some silly bits here and there, it’s didn’t do anything all that right, other than look really good most of the time. But superficial beauty will only get you so far with me, so consider this a mild recommendation at best.