We don’t normally reprint reviews, but how could we not when the subject of the review is a collection edited by one of our very own?  Here’s a great review for Brian M. Sammons’ Spellbound: 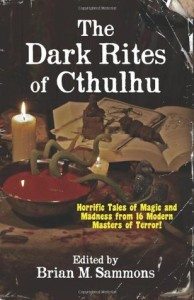 The Dark Rites of Cthulhu by George Anderson

The Dark Rites of Cthulhu is the first publication from April Moon Books. And what a high benchmark they have set themselves! This anthology, edited by Brian M. Sammons, is a collection of 16 original tales of black magic, incantations, rites, ritual and madness delivered by some of the best exponents of the dark art of Lovecraftian writing around.

In a lot of Lovecraftian/Cthulhu mythos fiction the emphasis is usually on the end result of reading from forbidden tomes. This anthology eschews that in favour of concentrating on the more esoteric and obscures processes that lead up to that end result. And in doing so it concentrates far more on the really frightening aspect of the Cthulhu mythos, namely that of the frailties of the human condition in its quest for knowledge.

The opening story is “The Keeper of the Gate” by William Meikle. What starts out as a police investigation into a shooting in the suburbs rapidly descends into chaos and madness when detectives start looking a little too closely at the victim and his lifestyle. You can’t fault this as an opener. I’ve always loved stories that feature the Dweller at the Threshold and this one doesn’t disappoint! Next up is “Dead Man’s Tongue” by Joshua Reynolds which features a certain Randolph Carter and his exploits in dealing with the perverse ritual of “Ralong”. A really well written and fun story!

“The Dark Horse” by John Goodrich is set in an almost medieval/post apocalyptic version of New York after the rise of the Old Ones. Goodrich just nails it in terms of the bleakness and despair of being in a world ripped from reality and bereft of hope. As with all things, redemption and salvation may make an appearance. And in the case of this delightfully bleak story, appearances can be very, very deceptive. Sometimes it is better to stick with what you have than what you actually get!

Next up is “The Changing of the Guard” from Peter Rawlick. This is a wonderful little tale about how to manage and control the forbidden knowledge and information contained at Miskatonic University. As one would expect from Rawlick, he has an uncanny knack for wringing new life from established characters. This is then followed by “The Murder at the Motel” By Brian M. Sammons. Set during Halloween it chronicles the encounter between a so-so magician and a real sorcerer. Let’s just say career re-evaluation is the order of the night!

Following on from Sammons’ wicked little tale of psychopomps is Robert M. Price’s majestic “The Grey Rite of Azathoth”. Price uses his intimate knowledge of biblical and scripture studies to excellent effect in this story of an encounter between Joseph Curwen and a man of the cloth and a unique “show and tell”. Sam Stone’s “The Vessel” is a cracking little tale set in Civil war era New Orleans about one man’s quest to save his beloved from a life of slavery. As is the case with these things, appearances can be oh so deceptive and love can most definitely be blind.

“Like, Comment, Share” by Don Webb is a sharp story about the digital age and the dominance of Facebook. Just suppose all of those little packets of information you commonly shift about are little bits and pieces of a ritual. What happens when they all align? And do you really know who your “friends” are? Really, really liked this story. Don Webb can take a simple premise and twist it into something really subtle and insidious.

“With Death Comes Life” by Scott T. Goudsward is about loss and longing. A young man awakens to find his girlfriend has killed herself. His investigations lead him to a book. The book leads him to resurrection but as one would expect from this type of book, the end result is not what you desire. He’s one of the authors in here whom I had never heard of. Methinks I will again. “The Dogs” by Jeffrey Thomas is as weird and delightful as one would expect from his penmanship. A man creates a window into an alternate version of Earth where the phrase “man’s best friend” takes on all sorts of wrongness. I don’t know if I’ll be able to look at dogs with bones in the same light ever again!

“Of Circles and Rings” by Tom Lynch is a cracking little tale about the relationship between two martial arts fighters and how one has developed a unique fighting style over time. Suffice to say it doesn’t end well for one of the two when he encounters the real Master. Glynn Owen Barrass offers up “The Bride of the Beast” about a detective’s encounter with a diabolical old man and his version of a Tillinghast Resonator. As one would expect the effects of being in the vicinity of such a device are felt well beyond the event. From Beyond has nothing on this story!

C.J. Henderson is next up with “The Nest of Pain”. After reading this gem about a house and its’ effects on residents methinks you’ll interpret any little creak or groan in your house’ walls as something to be investigated! “Black Tallow” By Edward M. Erdelae is a creepy story about a man’s obsession with a book called “Infernalius” and to what extremes he will go to secure forbidden knowledge. I think if I have a power cut anytime soon i’ll be sure to have a torch. I don’t think I can look at candles in quite the same way.

“The Mindhouse” by Christine Morgan is just stunning in its’ writing. It is a narrative from a former patient of the Evergate Hospital about her madness and the unique therapeutic remedies and environment that the place provides. To say that I was blown away would probably be an understatement. This is exceptional writing in a anthology that is full of excellence.

Last, but by no means least, is T.E.Grau’s “The Half Made Thing” about a country house, a young boy and a pledge to make things whole. As one would expect from it being in this collection, that promise will have dire consequences once you have that knowledge at your fingertips.

To be honest this is one of those collections that just begs to be devoured in one sitting. Much like the protagonists contained herein you will thirst to know more and will probably just read and read and read. Top Notch!!!!