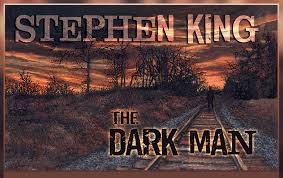 Stephen King’s latest book is The Dark Man, but it is not terribly accurate to think of it as a Stephen King book. More on this in a minute. The entire written content is a forty one line poem. That’s right. A poem, and it would easily fit on one standard page. A shortish poem for $25 is normally a hard sell, even for King fans. I predict many people who buy this on-line without seeing what the book actually contains are going to be very surprised, and not in a good way. True enough, it is supposed to represent the earliest impressions the author had of the character that would eventually become Randall Flagg. That is a pretty good reason to drop the cash. Still, twenty five dollars for forty one lines … you really have to want to read it. If you just go to a bookstore and pick it up in your hands, you can read the entire text in three minutes or less. A recon mission is the prudent approach.

And what about the text? Is it any good? The poem itself is not spectacular. The imagery is disjointed, seeking perhaps that jarring effect. It is about a dark man who rides the rails and murders a girl in a wheat field as a sign to others of his darkness. King fanatics are going to want to own this for sure, but besides being a Stephen King completist, there is a good reason to buy this little book—Glenn Chadbourne’s artwork. Indeed, the book is better described as a showcase of the artist’s line work than of any literary invention because every page is fully covered by delicate ink imaginings. Maybe you will not have any desire to read the poem a second time, but you might want to look at the artwork over and over again. I have leafed through the seventy-or-so art pages several times already. For the average horror fan, the artwork is the deciding factor, and to see it you should visit your local bookseller and check it out before committing. Let us have no buyer’s remorse.