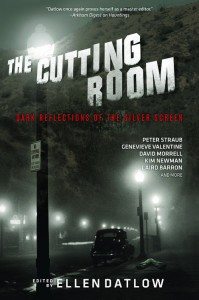 A tale of two covers:

Cover one is bright, vivid, intentionally garish. Primary colors predominate—red, blue, yellow. There are shadows, yes, but they are subdued, suggesting darkness rather than portraying it. There is implied movement in the “Midway” sign, the Ferris wheel, the characters (and creatures?) retreating into or emerging from brightly lit, canopied tents. True, a dead clown provides the focus for the cover, but that is as it should be. The cover is as brash, as kaleidoscopic, as calliopic as a carnival itself, a perfect entrée into the rough-and-tumble, death-defying worlds of Nightmare Carnival (for my review of the anthology, please click here.)

Cover two…, well, it is as far from cover one as it is logically possible to be. It is dark, not quite black-and-white, not quite sepia, but something indeterminate between the two. Tones are muted—except for the subtitle in red sans-serif caps; but the words are small enough not to arrest immediate attention. The most vivid, eye-catching elements are the stark white letters forming title, list of contributors, and editor’s name. Everything else recedes into fog, into uncertainty. The arrangement of the title suggests the famous “HOLLYWOOD” sign; the single vehicle, sedately parked beneath a streetlamp, suggests the thirties or forties; the body (what can be seen of it from a distinctly odd perspective) suggests…murder? A “No stopping at any time” hangs from one lamppost; similarly shaped rectangles imply that the directive applies to the entire street. Yet one car has stopped, has parked wheels-against-curb, and the result is…death? A scene from a movie, captured forever on celluloid? The ultimate in film noir?

As befits this meticulously modulated cover, the twenty-three pieces in The Cutting Room: Dark Reflections of the Silver Screen rarely deals directly with film. Instead, they reflect it, they cast it back and mirror it, often from unique perspectives, more than occasionally using lenses that distort and twist in order to assert deeper realities. As the title to one of the stories aptly indicates, the “movies,” in the most popular sense of that word, are rarely the focus here—Garry Kilworth’s “Filming the Making of the Film of the Making of Fitzcarraldo” hints at the complex levels of distancing, perception, and interpretation that can exist in the relationship among actors, cameras, and observers.

The stories range from relatively straight-forward narrative; to narrative transmuting seamlessly into script, bringing characters—and readers—into the texture of a film; to narrative as verbal representation of filmic hyper-realism, existentialism, absurdism, surrealism, and several other –isms. The first, Edward Bryant’s “The Cutter,” reads literally as a man’s descent into madness from unrequited love; on other levels, it seems concerned with society’s unequitable love for realities that can exist only in movies. The last, Kim Newman’s devastatingly funny “Illimitable Dominion,” conjures a world overtaken by the ghost of Edgar Allan Poe and the spate of Poe-based films that were produced in the mid-1960s. Every story in between modulates carefully between direction and indirection, between implication and inference.

In “The Hanged Man of Oz,” Steve Nagy deals with a rumored suicide on the set of The Wizard of Oz, and in the process brings the main characters to—and into—life. F. Paul Wilson’s “Cuts” considers life itself as a millennia-long film, in which characters become aware that someone—or something—is editing key moments. David Morrell’s “Dead Image” resurrects a film icon, only to have his second life eerily parallel his first…except for an appropriately horrific final scene. Roger Shearman’s “The Constantinople Archives” presents a semi-scholarly account of the fragments of black-and-white film that survived the destruction of the eastern arm of the Roman Empire in 1453, sometimes comedically, sometimes with devastating results. Genevieve Valentine’s “She Drives the Men to Crimes of Passion” gives a rationale—albeit a fantastical one—for the occasional, inexplicable disappearance of rising screen stars.

Several quotations from the stories crystalize the importance of film in our world. Bryant’s “The Cutter” begins: “My memory is still intact. I remember the scene as well as I can recall any other episode from my childhood.” Even though it hints at a Poe-esque threat—“still intact”—it more directly speaks to the phenomenon of film replacing experience for generations of viewers, of history becoming what a certain director captured on celluloid rather than what audiences might have actually lived through, on the universal tendency to re-work memories into more satisfying visual narratives. As A.C. Wise says of the film at the core of “Final Girl Theory,” “Kaleidoscope exists in people’s minds. It exists in the brief, flickering space between frames. The real movie screen is the inside of their eyelids, the back of their skulls when they close their eyes and try to sleep.”

A film exists as images projected onto a screen. The process of film, this anthology proclaims, is never-ending, stepping down from the screen and into the imaginations of the audience, where it continues to grow, to permute, to change…itself and the beholder.