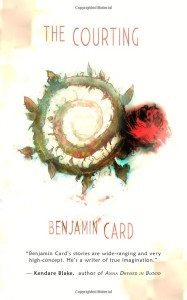 The Courting, Benjamin Card’s debut collection, contains nine short stories and one novella, all of which fall somewhere under the spectrum of speculative fiction. The inclusion of an introduction by Jennifer Serling (niece of the late, great Rod Serling), may bring certain expectations with it. While there’s much here that will please Twilight Zone diehards, Card delves into a wide range of  material with a voice that is wholly his own.

The title story sets the collection off to a strong start. In this delightfully strange and psychotic tale, women the world over are suddenly love-stricken and effectively incapacitated by a mysterious something in the sky, a something that communicates with only them. The story’s focus is on one man striving to regain the affection of his wife by any means necessary, which, as it turns out, steers things in some wild and bloody directions. Love’s most absurd aspects are at the forefront. The lines between love, obsession, and sheer lunacy are removed, making way for an exploration of the hazy, dark spaces that remain. It’s thoughtful. It’s tense. It’s also borderline hilarious in a deadpan, gallows sort of way. Most of all it’s good old-fashioned fun.

The aptly titled “Blind Date” continues blending the humorous with the uncanny. This story acknowledges the fears and unknowns of the dating scene and proceeds to take emotional disconnection to a potentially interdimensional level – two unfortunate souls literally can’t see eye to eye, because they can’t see each other at all.

“Wake Up!” centers on two characters in alternating segments. One is CFO of a company in New York, the other an impoverished African boy struggling to provide for his family. What makes things interesting is that they’re one and the same – when one sleeps, they’re dreaming the other. It’s written with a softer touch than the previous stories, and the questions raised are regarding selfishness and compassion. The characters’ intertwining lives come to a head in the poetic justice of the twist ending.

“Late-Night Snack”, the darkest and most outright horror story of the collection, combines the childhood fear of the bogeyman with the stark, disturbing reality of child abuse. It’s told from the perspective of a young boy whose seemingly demon-possessed father visits his bedroom each night, threatening to eat him. Naturally this demon deals in the art of emotional manipulation. Most of the story chronicles the boy’s attempts to get through to his ‘real’ father, and the bleakness is unrelenting.

“The Glitch” sees a man dealing with the barriers we all face in life, but in his case they’re brought about by literal barriers – invisible walls. Fearing madness and relegated to a prison he can’t even see, he eventually finds his predicament to be illuminating, albeit inescapable.

The other stories are short, immediate bursts of fancy that complement the longer pieces – a man carries his wife’s memory with him in various incarnations, a broken family takes one last vacation, a man loses his heartbeat and quite possibly his mind, a man walks out on his wife and doesn’t stop walking, and a committed couple attempt to thwart the fate handed to them in the afterlife.

The Courting is an impressive first collection. As strange as things get, the world of Card’s stories feels like one not too far removed from our own. It’s dark at times, quirky and playful at others, and always an entertaining place to visit. Recommended.