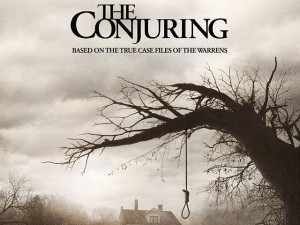 The Conjuring is a frightening horror film that packs a wallop. It is not afraid to use every trick in the book to make us shrink into our seats riddled in fear, only to have us bolt from them moments later in sheer terror. This is a haunted house tale that works.

The film tells the true story of a family in the early seventies who move into a Rhode Island farmhouse that is seriously haunted. The ghosts in this house are evil to the core. There are no “things going bump in the night” here. In this hell house, things come crashing down at night and wicked looking spirits pounce from dark corners of rooms. I am giving nothing away when I tell you that the spirit of a demonic child killer who wants the family gone haunts the house.

The film is set in the early seventies and plays out like a film made during that fruitful filmmaking time. The direction is handled with class and respect to character development.

Directed by James Wan, the director of the original Saw and the excellent haunted house film Insidious, the film is masterfully crafted. He takes his time and doesn’t cow tow to the need of modern horror fans to get their thrills quick and nonstop. Wan respects the audience and creates an atmosphere that builds slowly until the final act, when the hauntings become major and terrifyingly dangerous.

The center of the film is the family, with Ron Livingston playing the father and the great Lilli Taylor playing the mother. Taylor is put through the emotional ringer as the mom trying to save her house, her family, and her very soul. Taylor gives one of the finest and most heartfelt performances of her career.

The other main characters are the real life paranormal research couple Ed and Lorraine Warren, played nicely by Patrick Wilson and Vera Farmiga who both, along with Taylor, give Oscar worthy performances. Farmiga is still shaken and emotionally drained from being involved in an exorcism a year before and is fragile as she confronts the demons in the house. Her scenes are heartbreaking and played with a level of skill that has gone missing in most of today’s horror films.

The terror scenes in this film are truly scary. I confess to being a bit jaded through the years, as I have seen just about every kind of horror film imaginable. Without ego I say that it is tough to scare me. The Conjuring frightened me. I was riveted from the get go. The filmmakers wisely stay away from camp and self-awareness and give the film a steady hand that roots it in reality while dealing with such things as the paranormal and demons.

I cannot say too much about the frights in the film. I can tell you that there is a doll, Annabelle, that will have you white knuckled to your chair. There are many scenes in complete darkness that will slow your breathing to a crawl. Oh yes, in this film there is something around every corner, behind every wall, and in every inch of the darkness. I will never again play “hide and clap” and neither will you after seeing this film.

There is also an exorcism towards the end of the film. Mind you, The Exorcist is my favorite horror film of all time, one of my top 15 films of any genre, and the only film that still scares me after many, many, repeat viewings. Over the years there have been endless exorcism scenes in horror films trying to top The Exorcist in style and scares. In my opinion, none of them have been effective. In The Conjuring, the exorcism scene works. It is brutal and terrifying and ranks as the best one since the original Exorcist. You will be riveted.

Brothers Chad and Carey Hayes wrote the film and I was surprised by the fact that the screenplay was good at all. These are the brothers responsible for penning the atrocious horror films, House of Wax, The Reaping, and White Out. These three films are abominations in the world of horror, but here they show a maturity and depth that we could not have seen coming due to their previous work. It is a literate and imaginative script.

With this film, James Wan earns a place at the table of today’s masters of horror cinema. Lest we forget that, at the time of its release, Saw was original and spooky, and his Insidious, while not as accomplished as this new film, was a fine example of how to do a haunted house film with genuine scares. He has directed a sequel to Insidious that comes out later this year and I am looking forward to that with great anticipation.

The Conjuring is a near masterpiece of modern horror. It is a film full of shadows, darkness, and extreme tension. It creates its mood and never strays from the path. If you are looking to be scared, this is the film for you.