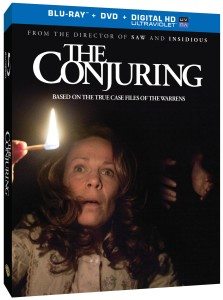 I have mixed feelings for this movie. First, I love the director of it. James Wan is a master of horror, one of the few that’s still making movies that are by far more good than bad. He knows how to use the camera and direct his actors to build suspense and tension. He’s a fan of the genre, so he knows all the tricks that pertain to it. He loves to get the audience looking into the dark corners of the screen or under the bed, waiting for some ghost or bogyman to jump out…and then have nothing happen. Only to then later hit you with a jump scare. Usually I’m not a fan of the BOO! jump scares, but Mr. Wan knows how to employ them very well and most importantly, not overuse them.

Unfortunately I am not a fan of the real life demonologists, the Warrens, who play a big part in this movie. As a horror fan for a long time, I have run into them a number of times. Looking into them I pretty much came to the conclusion that they are utter frauds and attention seekers of the highest order. Yeah, I’m not a fan of them, and because they play such a large part in this movie, their presence sort of tainted it.

Back to the good. There is some great creepy atmosphere in this movie. See the first paragraph in this review for the main reason why. It’s a pretty basic story: family buys old house and soon are running scared from all sorts of spooks. They call in the experts, complete with a token skeptic in tow, just so he can get good and scared and learn a lesson. Together they uncover the mystery of who (or what) is behind the haunting and how to defeat it. So yeah, it’s a paint by numbers ghost story, but that doesn’t mean that it doesn’t deliver the scary goods. That The Conjuring does again and again.

Back to some bad. Sort of. If you’re a huge horrorhead like me, and I guess some of you out there are, then you may end up unwittingly playing a game of “where have I seen that before?” Now all movies are influenced by what has come before, and some play homage to that, but the “homages” in The Conjuring are many, and most are not too subtle. Paranormal Activity, The Exorcist, Poltergeist, and the Changeling are just a few of the movies that come to mind that had bits lifted and slipped into this movie, nearly scene for scene. If you are a member of the general public and haven’t seen a bunch of haunted house movies before, then this might not be a big deal for you. You can probably just sit back and enjoy a good, spooky movie. But for me, it was kind of annoying.

Whether or not you like this movie, the new Blu-ray from Warner Brothers is kind of lacking in the special features department. All you will find here are three rather short featurettes. The first one is called, “The Conjuring: Face to Face With Terror” which is a 7 minute interview with the actual Perron family, the people who bought the haunted house for real. Another one is “A Life in Demonology” which is an over 15 minute look at the Warrens and there demon hunting days. The third is, “Scaring the @$*% Out of You” and yes, those symbols are in the title. This one is basically a behind the scenes thing that runs 8 minutes. And that’s it. There is no commentary track, not even a trailer. So yeah, that’s kind of sucky no matter how you slice it.

Now comes the big question: did I like The Conjuring? Yes, yes I did. Despite the dubiousness of this “true story” and the somewhat liberal use of scares taken from other fright films, the sum is greater than the parts here. This film has plenty of effective frights, is very well directed, and all the actors do good work. When it is all said and done, that’s all I really want from my horror movies. Because of that, The Conjuring is well recommended.