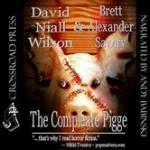 Available for the first time in Audio – The Compleate Pigge – written by David Niall Wilson & Brett Alexander Savory and brought to snarky, black-humor life by the magic voice of Mr. Andy Babinski.

Description: Johnson Milhone is crazy… or is he? Talking, sentient stuffed pigs that may, or may not, be sewn from the flesh of his father? A psychpathic brother… or… just a bully? A mother who may be a controlling serial killer? A psychiatrist who may, or may not, be a spider? Follow Johnson down the dark tracks of his mind as he deals with being dismembered and disemboweled, meets giant talking Scottish cats, takes a trip through the worlds of Edgar Allen Poe – and so much more.

The main novella in this work, “My Eyes Are Nailed, But I Still See” was published as a limited edition from Delirium Books. Also included are the short story “I am Yesterday and I am Today”, which was published in In Delirium II, and the short story “Johnson’s Journal”, written by David Niall Wilson as a companion chapbook to the original novella. These stories have been compared to Donnie Darko.

This series of surreal, very dark short stories began its publishing life in the chapbook “That’s Some Pig,” many years ago. Subsequent tales were written, and eventually combined into a single, tied-together nightmare for Delirium Books, who released “My Eyes are Nailed, But I Still See” in limited edition HC. This Audiobook contains all of the original pig stories, plus “Johnson’s Journal,” written by Wilson flying solo, and the final pig story written for In Delirium II – a tribute anthology to Shane Staley, who first published the work as a whole.

Also available in a variety of eBook formats from Crossroad Press, the Audiobook is available exclusively at Audible.com, iTunes, and Amazon.com as a digital download.