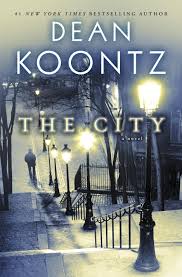 This is the one that comes to mind after reading The City by Dean Koontz.  I think this may be the best novel he’s ever written.  Gerda definitely hit the nail on the head when praising it.  This was so good that I even put off reading the ending for nearly a week, afraid that many of the characters I’d grown to love during the course of the book were going to die.  Tears did roll down my cheeks at the end, but they were happy ones.

What sets The City apart from the other novels by Dean Koontz is that this is basically a story of a young black boy, Jonah Kirk, who is a piano prodigy and takes after his grandfather.  The boy is a good human being, as is his mother, grandparents, and most the people who come into his life, especially Miss. Pearl.  Of course, there is also evil there in the form of his absent father, Tilton, and the cruel individuals he chooses to hang with.  It’s that particular evil that will test the goodness of Jonah Kirk’s heart, bringing suffering, loss, and chaos to his young life.

The City tells the story of Jonah Kirk’s earlier years as a boy who encounters life within the urban metropolis he’s born into.  He’s a good-natured lad, whose mother is a nightclub singer, while working the day shift at Woolworths, so food can be put on the table.  His grandparents are sweet people who think the world of him.  His grandfather Teddy, however, was the piano player for some of the greatest swing bands in the thirties and forties.  Jonah shares his grandfather’s talent and his mother’s love of music.

Throughout his growing years, Jonah meets a number of unique individuals who not only befriend him, but become an important aspect of his life and personal development: Mr. Yoshioka, Mrs. Lorenzo, Malcolm, Amalia and Miss Pearl.  They recognize the inner essence of Jonah’s good heart and are drawn to it, as they are to the music he makes with the piano.  They also teach him about the beauty of the city he lives in.

There are others who hate Jonah and what he represents like his no-good father, Tilton, who occasionally appears to disrupt his son’s life and create hardship for Jonah’s mother.  Let’s not forget Fiona Cassidy, who is one of the most evil females in literary history.  Though pretty, she’ll cut you with a blade in a heartbeat and not regret the shedding of blood.  Then, there’s the mastermind of this little group, Lucas Drackman, who enjoys killing, but only when it suits his needs.  He will soon make an exception with Jonah and those who get in his way.

Putting all the evil aside, there is a special person who seems to watch over Jonah.  Her name is Miss Pearl, and she appears in his life in many different forms to guide his growth and appreciation of the city she represents in human form.  I don’t know if she’s an angel or not, but she certainly appears that way to Jonah.

What Dean Koontz has done with The City is written an unparallel story of goodness and its confrontation with evil.  Though the author has touched on many of this book’s higher qualities in his previous writings, this novel is overwhelming in its spiritual aspects of good versus evil, and how a little boy copes with the different emotions that flow through him every day, whether they are good or bad.

In many ways, The City is a loving gift from Dean Koontz to his readers, displaying his diversity in writing and offering them a heart-rendering story that wraps them up inside a comfortable cocoon for a few days of well being.  It allows them to see that there is still much hidden to our eyes within this miraculous world that we’re unable to understand and grasp.  This is what I refer to in my life as the magic of the Universe.

The City is Dean Koontz at his absolute best, showering the reader with exquisite prose and a thought-provoking storyline that will have him thinking and exploring his own inner emotions about the world we live in and what each locale entails for its inhabitants.  It will cause the reader to question his own goodness and of those around him, enticing him to become better and more giving as a human being.