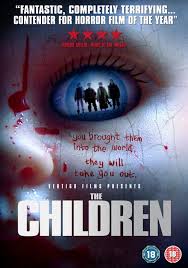 Evil, malign children as the focal for a horror premise. Let’s reel off just a few of them, shall we? There are outings such as The Exorcist and The Omen, of course – retro masterpieces that have stood their ground over the span of generations. Different incarnations of Village of The Damned and vintage classics like The Bad Seed. For modern audiences, there is the memorable performance by Gage Creed in Pet Sematary. And, in horror literature, Stephen King laid out some of the early foundations with Children of the Corn …  a small, dark slice of rural Americana that has spawned an entirely unremarkable celluloid franchise. What all of this tells us, of course – is that little monsters in the genre are here to stay. When the most innocent of our creatures in the human tribe succumb to a malady of evil, wide-eyed disbelief is often tempered with guilty pleasure – for when children enact revenge on their oppressive adult overlords, it’s sometimes all too easy to root for them.

Released in 2008, The Children is a British horror film that found approval on its native shores but has largely gone under the radar. Here, the writers have taken a well-worn sub-genre (creepy kids), but found a relatively original plot for them to navigate around. Though an unexplained virus seems to be at the crux of the narrative, the story is lent strength by its isolated setting, domestic component, and a slow build of tension.

Snow is thick on the ground when Elaine and her family (husband Jonah, teenage daughter Casey, and two younger children) arrive to spend Christmas and New Years with her sister Chloe and her own extended family. It’s a picturesque occasion … not only having relatives under one roof for the festive season but doing so in a country environment that is quintessentially British – a holiday of fire, hearth and snow. Laughter is prevalent, and the decorations have been hung. Soon, family members begin exhibiting strange symptoms: some of the children are vomiting and becoming listless; emo teenager Casey merely wants to escape. Random acts of playtime in the snow turn malicious with deliberate acts of sabotage intended to hurt the adults. Misbehaving children, crying children, and a general air of malaise (beyond the holiday norm) all culminate in a gruesome fatality: the demise of an adult in a contrivance that is anything but an accident. Although the authorities are alerted, the snow and isolation delay a response, giving the children more than enough time to form an unruly cabal … and play the adults off to their ultimate demise.

Though the catalyst for the children’s decent into madness is never properly addressed, its very enigma makes their character motivations ultimately more appealing. With no rules or strictures, you never quite know what to expect or what palpable spooks lay in wait – a refreshing change from a decade of horror where ‘nothing we haven’t seen before’ becomes a ritual critique. By the mid-point, a lot of confusion abounds – not just for the terrified adults, but for the viewer who now has to contend with second-act filler: moody looks from our teenage emo, over-acting, and awkward dialogue. Fortunately these small, self-conscious scenes do not over-extend themselves, making headway into a third act that amps up the carnage and doesn’t overly censure itself.

Low on gore but still potent in atmosphere, music, and pacing – The Children is reminiscent of some of the more memorable films of the eighties – albeit with a far lower budget. (With all that snow, The Omen II certainly came to mind on more than one occasion). Performances from the children are mature, and overall the film stretches its rating by daring to splice them with uncensored savagery. The ending, when it comes, is one the finest elements here. Not a twist per se … but more a final ‘coda’ that raises more questions than answers and leaves the door open for added mythology.