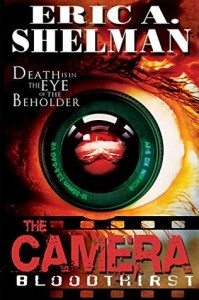 Forensics photographer Jack Hunger is looking to fill a void within his dismal life. Stumbling across a classic camera within a thrift store one day he delves into a new found hobby. While deciding to make a photographic journal of police scene misadventures, he feels revitalized and begins to develop his images.

Something has gone terribly awry as Hunger notices the discarded photographs managed to develop on their own in the garbage. Colleague and friend Sheriff Wayne Olsen calls with an emergency stating that some of the morgue staff have been ravaged and the body of Russian mob killer Sergei Veselov has gone missing. What may not seem that out of the ordinary in the vocation of police work and forensics Hunger and Olsen quickly realize Veselov was one of the last photographed with Hunger’s new camera. Now Olsen and Hunger must track down the missing body they’re suspect has become reanimated. Will they be able to track down the relentless killer or will Veselov remain unstoppable in his rising path of destruction?

Author Eric A. Shelman unleashes his thirteenth novel. In The Camera: Bloodthirst, hard core fans and those new to his endeavors will be far from disappointed. The theme of a camera, an innate object with supernatural tendencies is riveting, original good terror that will appeal to a large demographic.

The subtext of a supernatural premise and reanimated (not to be confused with zombie related fiction) mash-up will engage not only genre fans but a discerning audience that is looking for something more. Complex overtures are delivered seemingly with ease and covers a great deal of ground for a relatively modest page count of two-hundred eighty-eight.

While Shelman is no question best known for his hit runaway zombie series Dead Hunger (on the cusp of releasing part eight), the author proves once again he’s far from a one trick pony. As The Camera stands on its own, the readership is privy to his uncanny ability to craft compelling suspense at a break neck pace. This particular plot will resonate among readers long after consumption of the final chapter.

I particularly like the symbolism of photographs and all it embodies. Pictures are intended to be held as memories, nostalgia and keepsakes. This premise alone is a powerful one that touches a large audience yet is often overlooked in contemporary fiction. The characters of Jack Hunger and Sergei Veselov are as diverse as night and day, yet each vies to rekindle or resurrect a void long lost within their respective lives. It’s a touch of melancholy that many will relate to whether it’s a struggle to slow down time and cling to life’s most cherished moments or one man’s sociopathic lust for blood. The end result is one and the same. I’m hard pressed to discover any reader that will not devour this tale within two to three sittings.

A considerable deal of the tale is told through dialogue. Shelman reels in his audience in the here and now, moving along the plot and forever escalating presenting the story telling process in fashion that makes it look easy. It’s been a sincere honour to witness this author continue to flourish and broaden his craft from one release to the next.

Genre fans at first glimpse may be a little apprehensive about what kind of grit may be unveiled. Make no mistake about it, the grisly details contained within these pages are enough to make you cringe, your digestive lurch and you may be compelled to sleep with the lights on for a spell. Shelman has truly upped the ante in the gore factor, no easy feat for a writer best known for zombie fiction.

The action moves swiftly and can measure up pound for pound against any suspense, horror or action literary or cinematic release out there.

Interpersonal relationships between such characters as Olsen and Jack or Hunger and Hannah are heartfelt. One would have to resist with everything they had to avoid feeling empathy or relating to any of these characters. As the reader, we get behind their emotional bond and bask vicariously in their endeavors.

Some noteworthy scenes occur between Olsen and Jack with a semi-reanimated corpse. The tension evokes so much nerve fraying sensation it morphs into a product of utter hysterical comedy. While the two grapple with piecing together a former friend and colleague, one cannot deny the reminiscence of the film C.H.U.D. and all the dark humour that is deliciously exploited.

The use of the camera’s exposition in the early pages including its history and how it ends up in Hunger’s hands as a central character is effective. Readers will be spellbound as it lays the ground work for captivating plot construction until the bone chilling climax.

A special bonus afterword is presented in the form of a flash fiction fan contest, including short stories from Amanda Barnett, Rebecca Parker and Jeff Clare and Justin Dunne.