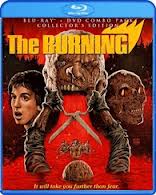 The Burning is one of those classic 80s slasher flicks that should be a whole lot better known than it is. Filmed around the same time as Friday the 13th, it has many similarities with that world famous fright flick. Both have a murderous maniac out for revenge, both are set in a wooded summer camp, both feature amazingly bloody kills from make-up FX guru of gore, Tom Savini. The Burning could have been a franchise like the Friday the 13th flicks as it is as good as any of those, and far better than some of them. Sadly that was not the case and thus this fan favorite has been given the short shrift for far too many years. Thankfully that has finally changed as the horror masters over at Scream Factory will be bringing this out on Blu-ray for the first time on May 21st. Now I have already given away the answer to the “should you get it” question, so if you’re short on time, go ahead and quit reading and just pick this baby up on Blu-ray when you can. But if you have never heard or seen The Burning and want to know more about it, I’ll be happy to give you the nickel tour.

When I say that this movie is a classic, I mean it as it doesn’t get more “spooky tale told around a campfire” than this. Some years back at summer camp a few kids play a prank on the weirdo, mean-spirited handyman/caretaker named Cropsy. The prank involved fire, and since the name of this movie is The Burning, you know that no good can come from that. Cue one badly burnt up handyman and then cut to five years later when the horribly scared Cropsy (the skin grafts never took) is finally released from the hospital so he can go back to the woods and the camp and start a-slashing with his favorite pair of long-bladed shears.

What sets this movie apart from the run of the mill summer camp slasher is that there was no run of the mill before it. Again, there was the first Friday the 13th, but that one largely took place at a camp before it was open. This one takes place at a packed summer camp with kids that actually look like kids. Oh sure, there might be a few mid-to-late twenty-somethings in here playing teenage counselors, but most of the cast looks to be right at home here. Of special note to cinephiles out there, this was Miramax’s first movie, it has a memorable performance by Jason Alexander as one of the “kids” (he was in his early 20s in this and with his already receding hairline he looked much older), a blink and you miss a shot of  Holly Hunter as another camper, and Fisher Stevens and Ned Eisenberg (two “hey I know that guy” character actors) as other victims…I mean kids. And for the splatter fans, this movie has effects by Tom Savini who does some of his best gore work on this movie.

Another great thing about this movie is just how good it looks. First and foremost it is a time capsule for the early 80s and I just love that. Second, with the addition of real kids and the fact that it was shot at a real summer camp, it has an authentic look to it. Third, the killer has a signature weapon (his shears) and a great look once his horrible face is revealed. Most importantly, it is well directed by someone with some skill and it looks like an honest to god movie, as opposed to all the direct to video horror flicks that would follow it.

Lastly applause must be given to the writers and actors here. In many slasher flicks the characters are disposable and interchangeable knife fodder. Worst yet, often they are so grating that you can’t wait to see them reduced to bleeding meat piles just so they’re off the screen. In The Burning, each of the characters has a distinct personality and most, but not all, seem like good kids just having fun. So when they are in danger, you’re not thinking, “Oh good, please kill them” and you actually feel bad when they meet the business end of Cropy’s shears. That alone gets this film major points from me.

Now for the extras on this new Blu-ray/DVD double pack from the amazing Scream Factory. First I’ve got to say that man does this movie look great. But that’s to be expected for Blu-ray. Second, Scream Factory must be applauded for including all the extras on this release that were on the last DVD release. It is a huge pet peeve of mine when a new version of a movie doesn’t have something that a previous version did, so yay that this one doesn’t cheap out like so many other releases do. As for those extras, both the old and the new, there are quite a few to talk about. There is a commentary track with the director, Tony Maylam, and a journalist by the name of Alan Jones. There is a brand new commentary track with actors Shelly Bruce and Bonnie Deroski. There is an 18 minute interview with make-up FX guru Tom Savini that comes complete with a montage of a whole bunch of behind the scenes footage. There is an interview with editor Jack Sholder (who would go on to direct the horror movies Alone in the Dark, Nightmare on Elm Street 2, and the sci-fi flick, The Hidden) that runs 12 minutes. Then we get to hear from Cropsy himself with an 11 minute interview with Lou David, the actor who played the burnt-faced slasher.  The last interview on here is with actress Leah Ayres who was the leading lady, and this runs just under 7 minutes. In addition to that passel of interviews, there are the trailer, a make-up effects still gallery, a poster and still gallery, and about 8 minutes of random behind the scenes footage. That’s a whole lot of goodies for this largely forgotten fright flick.

The Burning is a classic slasher in every sense of the word. Blood, breasts, and one memorable man-beast in good ol’ Cropsy, this film has it all. I love it to death, and if you have never seen The Burning then you are missing out. Thankfully you now have a great new high-def edition to feast your eyes on. If you are already a fan of this movie and have it on DVD consider is a mandatory upgrade. Yeah, it’s that good. This new Blu-ray is far beyond highly recommended. It’s a must have for all serious horrorheads.