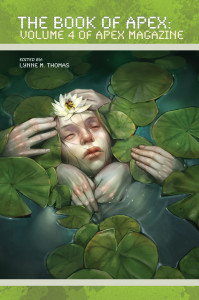 The Book of Apex: Volume Four of Apex Magazine

Thomas has selected thirty-three stories covering fantasy science fiction and horror for this volume. There isn’t a clear theme united the pieces, but I do think you could describe them as sharing a certain tone and stylistic sensibilities. A “best of” anthology showcases a magazine’s editorial perspective, because they select the stories that they print, and then distill those volumes down even further for the collection. As such, the Book of Apex represents the voice of the magazine: “Strange. Beautiful. Shocking. Surreal.”

Although the writers have their own voices, the overall style tends to be lyrical. The prose is frequently beautiful or poetic. The language tends to the expressive, descriptive, and may not be to the taste of people who prefer their prose lean or spare. There is above average use of first-person perspective and the second-person point of view appears as well. The presence of the story-teller is frequently present, with a clear narrative voice as opposed to an invisible objective one.

The work is generally very interior and character driven. In terms of plot and exterior action, a Hemmingway might boil many of these down to flash.  Some stories do nothing but provide the background for a decision and end at the moment at which the decision is made. I felt left hanging in a number of instances, as tales built to a conclusion but stopped at the edge of denouement. These are strange stories of unusual circumstances. Sometimes haunting, emotionally raw, occasionally romantic or gothic in tone. The narratives are sometimes dreamlike or devoted to ruminative memory. They ache of desire, loss, and transformation. They speak of secret wishes that are never quit fulfilled, leaving behind traces of emptiness and regret.

Fans of Apex Magazine, and of strange and beautiful stories, will enjoy the volume.