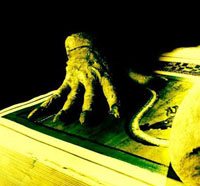 A one-off project of unprecedented scale, THE BOOK brings together, for the very first time, the writers, directors, actors, composers, and artists behind the finest Italian genre cinema of the past sixty years. This includes the creative forces behind the Giallo movement, Spaghetti Westerns, Eurocrime, and more. Each director will be given the opportunity to showcase his own personal vision of Rome, spread across a dozen episodes. Each segment in this feature film will contain a unique blend of macabre thriller, horror, and the fantastic – all delivered with the unique style and method of the director in question.

THE BOOK features 12 individual episodes, each of which is helmed by a master of Italian genre cinema. The following directors are confirmed:

-LAMBERTO BAVA (SHOCK, MACABRE, DEMONS (1&2), BODY PUZZLE)
-ANTONIO BIDO (BLOODSTAINED SHADOW, CAT WITH THE JADE EYES, BLUE TORNADO)
-ENZO G. CASTELLARI (COLD EYES OF FEAR, THE HOUSE BY THE EDGE OF THE LAKE, THE LAST SHARK, INGLORIOUS BASTARDS)
-LUIGI COZZI (THE KILLER MUST KILL AGAIN, CONTAMINATION, STARCRASH, THE BLACK CAT, PAGANINI HORROR)
-ALBERTO DE MARTINO (THE ANTICHRIST, SCENES FROM A MURDER, HOLOCAUST 2000)
-RUGGERO DEODATO (CANNIBAL HOLOCAUST, HOUSE ON THE EDGE OF THE PARK, LAST CANNIBAL WORLD, CUT AND RUN)
-ALDO LADO (NIGHT TRAIN MURDERS, SHORT NIGHT OF THE GLASS DOLLS)
-UMBERTO LENZI (NIGHTMARE CITY, SEVEN BLOOD-STAINED ORCHIDS, THE MAN FROM DEEP RIVER, EATEN ALIVE, GHOST HOUSE, CANNIBAL FEROX)
-EDOARDO MARGHERITI (IN THE EYES OF A KILLER, SIX STEPS INTO GIALLO, BLACK COBRA)
-SERGIO MARTINO (TORSO, ALL THE COLOURS OF THE DARK, THE STRANGE VICE OF MRS. WARDTH, MOUNTAIN OF THE CANNIBAL GOD, THE CASE OF THE SCORPION’S TAIL, YOUR VICE IS A LOCKED ROOM AND ONLY I HAVE THE KEY)
-SERGIO STIVALETTI (THE THREE FACES OF TERROR, THE PROFANE EXHIBIT, THE WAX MASK.
-TONINO VALERII (MY NAME IS NOBODY)

The screenplay will be provided by DARDANO SACCHETTI (THE BEYOND, DEMONS, MANHATTAN BABY), with exclusive poster art by ENZO SCIOTTI (THE BEYOND, PHENOMENA, NON VIOLENTATE JENNIFER (I SPIT ON YOUR GRAVE), THE HOUSE BY THE CEMETERY, DEMONS, CITY OF THE LIVING DEAD).

With more participants to be announced…

Following the ambitious extremity of THE PROFANE EXHIBIT, producers DAVID BOND and MANDA MANUEL present: THE BOOK. Assembling the finest living Italian filmmakers, the project intends to provide these elite creative forces a platform with which they can showcase the dexterity and innovation which brought them initial acclaim. Free of studio constraints, THE BOOK will be Italian genre at its most raw and basic form, with the impetus placed upon recapturing the magic which resonates with so many fans the world over.

An INDIEGOGO project designed to generate the start-up funding for THE BOOK is now up and running. Tired of the standardized trinkets that are usually offered as part of these funding schemes, the producers of THE BOOK have gone to great lengths to ensure that genuinely exclusive and one-of-a-kind bonuses have been offered. What is currently listed is only the beginning of what will be unveiled along the way. To ensure that people are paying attention to the project, there will be sporadic offers posted throughout the 90-day campaign. This will benefit all collectors, fans, and true enthusiasts of Italian genre cinema.