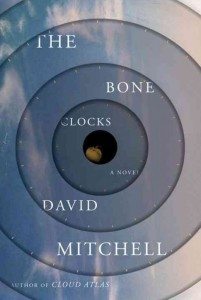 The Bone Clocks is a big book, not only in its physical size, but also in its chronological scope and its multitude of characters, themes, subjects, settings, and genres. It begins simply enough with Holly Sykes, a British teen who runs away from home in 1984 in hopes of moving in with her boyfriend. It ends with Holly Sykes as well, in a cordoned and deceptively pastoral stretch of post-apocalyptic Ireland circa 2043. Between these two places and times, the story paves its way through, among other locales, the Swiss Alps, war-torn Iraq, the Australian outback, New York City, and the eerie landscape that resides between life and death. It deals with everything from first love, betrayal, war, politics, the publishing industry, and a largely invisible clash between two secret societies of super-powered immortals battling over human souls. Yes, you read that right. It’s an ambitious novel, to be sure. While there are moments of brilliance throughout, that ambition could be its downfall for many readers.

The novel is divided into six sections, and the supernatural elements are introduced very slowly over the course of the first four of these (roughly 400 pages). In the first section we get a glimpse of the hidden world through Holly, as she serves as a kind of conduit for voices she can’t understand, let alone explain. The next section (and all of the others aside from the last) is told from the perspective of a different character, each having their own brushes with the inexplicable. The majority of the novel continues in this way, painting a broad picture of Holly through the smaller slice-of-life stories of the people around her. It’s a multi-layered journey through life – teen years, young adulthood, marriage, parenthood, and all the rest. While the prose is overblown at times, Mitchell often strikes gold in the way he words things and the little things he chooses to stop and zoom in on. Some parts are heartbreaking, some are terrifying, some are both at once (a man’s brief, panicked search for his missing child that extends for pages comes to mind). There are also parts that are uproariously funny (just wait till you get to the Crispin Hershey section).

Then we get to the point where the weird stuff drops its air of mystery, takes the reins, and slams you into the wall. We get the full range in all its glory – body-jacking, telepathy, prophecy, hypnotic suggestion, soul-stealing, reincarnation, astral travel, and explosive psychokinetic dogfights. In short, a good old-fashioned  epic battle between good and evil. It’s a hell of a lot of fun. The problem is that it doesn’t fully fit with the more prosaic aspects that make up the bulk of the novel. It feels like there are two novels here that have been put together, and they only complement each other to an extent. On their own they’re good, sometimes great, additions to their respective genres, but they’re not irrevocably ingrained in each other.

Rough around the edges as it may be, there’s enjoyment to be had in The Bone Clocks, and much food for thought. If you’re curious, then by all means, dive in. It’s a unique and engrossing puzzle box of a novel, and there’s something in it for everyone – just be prepared for a circuitous path to find whatever’s in it for you.