The Beast Within – Blu-ray review 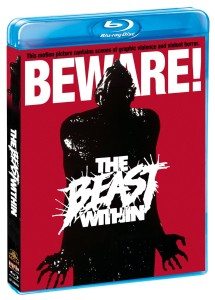 The Beast Within is a weird one. Let’s get that right out of the way. It’s about a woman down in Mississippi who one night is raped by some…thing. It’s not clearly shown, but it is obvious not human. Seventeen years later and the horrible assault has produced a normal looking teenage son named Michael who is having some…problems. Poor Michael is having nightmares, pain, and is going through some…changes. And by changes, I mean normal teenage boy things. You know, like killing and eating people! Yes, there is some sort of beast within Michael that’s just now starting to come to the surface.

Now don’t worry, that’s not really a spoiler, as that tidbit is given away early on in the movie. There is an interesting, if somewhat outlandish, mystery as to who or what was Michael’s real daddy and what horrible Beast lurks Within the young man. There is also something out there killing people, other than Michael, in horribly violet ways. Could it be the unseen, spooky-sounding thing that’s been locked away under an old, abandoned barn that Michael is inexplicably drawn to? Then there is the question as to why Michael goes crazy whenever he hear the cricket-like chirping of the cicadas.

Damn it, I can’t keep it to myself, it’s just so weird and awesome, so SPOLIERS for a 30+ year old movie if you have yet to see it.

You see, Mike’s mommy was raped by a bug-man-thing that’s sort of a big cicada. And just like cicadas’ seventeen-year-long lifecycle, now that Michael is seventeen, it’s time for him to answer nature’s unnatural call. Yes, this poor kid is a werecicada! Or at least, someone turning into a mutant man-bug thanks to some state of the art (circa 1982) special effects that are at once both cheesy and awesome. Hey, I’ll still take effects like these over CGI any day of the week.

So in The Beast Within you get an original, albeit implausible as hell, story that’s well told thanks to the efforts of screenwriter Tom (Fright Night, Child’s Play, Psycho II) Holland. The direction by Philippe Mora is solid, or at least miles better than what he did for The Howling II & III.  All the actors deliver their A-games here despite the silly premise, with special nods of approval go out to longtime genre vets Ronny Cox, R.G. Armstrong, and L.Q. Jones. And did I mention the groovy special effects?

As usual, the always amazing Scream Factory has put a lot of work in making this old, mostly fright flick look incredible. Simply put, you have never seen bugman rape look this good. As for the extras, they are both a hit and a miss. The hits are twofold; being a pair of pretty good audio commentary tracks. The first one is with director Philippe Mora and actor Paul Clemens who plays the unfortunate werecicada in the movie. The other is with screenwriter Tom Holland. Sadly the miss is everything else, as there are no featurettes, interviews, behind the scenes bits, or anything. There is just a theatrical trailer and some radio spots. That’s it.

The Beast Within is a weird but cool monster movie with an admittedly silly premise. If you can overlook that, you’ll likely have a lot fun with this one. If you’re a fan of the type of early 80s horror that they just don’t make anymore, then you’ll love this movie. As I am a huge fan of that, I can highly recommend this crazy little flick to anyone with similar tastes.