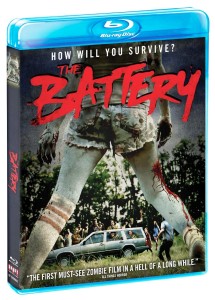 Confession time: this zombie film made my previous end of the year list as “the most overrated movie of the year.” Note, I didn’t say it was a bad film, but dear lord, was everyone lining up to sign the praises of this indie darling. Many of my fellow critics gushed about it to hyperbolic degrees of adulation, and sorry, but this movie didn’t live up to even half of the hype I heard about it. Such as it being the “greatest zombie movie in decades” and that it “redefined the horror genre.” Once again; I never not liked this movie, but by comparison to the cheerleaders that this flick had, you would think I hated it. And you know, after a while, I started to think that possibly I did. So when I got The Battery on Blu-ray from the horror masters over at Scream Factory, I was looking forward to giving this movie another watch, with somewhat fresher eyes, and hopefully a brain less clouded by people yelling at me how awesome it was and how I should absolutely love it. So, did I like it more or less the second time, or was I right on the money about it being a fine, but overhyped, bit of low budget horror fun? Well, grab your favorite baseball bat and let’s find out.

The film is about two men, a pitcher and a catcher of a minor-league baseball team, a “battery,” or so the movie told me, and their on foot journey through the countryside in a world overrun with the hungry undead. Our two leads just so happen to be the writer/producer/director of the movie, so that should give you some idea of how small of a movie this is. Anyway, the pair is bumming around, avoiding the big cities and major roads where the zombies dwell, and looking to live day by day, as really, what else can you do during a zombie apocalypse? And as far as plot goes, that’s pretty much it.

What sets this movie apart from the rest of the ravaging hoard of zombie movies out there, are the characters of Ben and Mickey. Not only are the fully fleshed out, being the sole people on camera for the vast majority of this film, but they are well written and acted. They are real people, not just disposable cardboard cutouts of clichéd archetypes as many characters in horror movies tend to be. Because of that realness to them, you care about them. Even when they occasionally act dumb or even petty, you get the reasons why, as they are always fully believable. The impressive work of Jeremy Gardner, Adam Cronheim, both in front and behind the camera, is the reason this movie is so good. If not for them, this might have been one of the forgettable also-rans in the modern glut of zombie movies.

The Battery also takes a different approach to the zombie subgenre, by not only focusing so closely on the two main characters, but also their day to day, somewhat mundane lives. Unlike other films of this ilk, the zombie gut munching is not the focus of the film, neither is the gritty survival in such a hellish world, or the inevitable cliché of “man is the real monster” that many such films become. Yes, there are bits of all that in here, but all that takes a backseat to a very human drama of two guys just trying to get along and live, not just survive. So yeah, The Battery does get some points from me for being different, as too many movies these days seem to think different is a dirty word and avoid it at all costs.

As for the extras on this new Blu-ray from the ever awesome and prolific Scream Factory, there is an audio commentary with writer/director/actor Jeremy Gardner, producer/actor Adam Cronheim, and director of photography Christian Stella. There is a making of featurette that runs an impressive hour and a half and is nearly as long as the movie it’s about. There is a 10 minute look at some of the bands that had music in the film, and then a trailer and some outtakes bring the special features to a close. Altogether, this is a very impressive collection of extras and goodies for such an independent film. Some big studio releases should take note and feel downright ashamed for not putting out discs half this good.

So what did I think about The Battery the second time I watched it? Well I still liked it. In fact, I liked it even more than I did the first time. No, it’s not incredible, nor amazing, and it doesn’t redefine a damn thing. That said, it is very well made, has characters I find believable, not to mention like, so I actually care if they become zombie chow or not. The story is solid, and as a first time effort for many involved with its making, that is impressive as hell. Yes, it’s not perfect. Some of the zombie effects really shows the film’s micro budget, but I’ve seen many movies with far better effects that were far, far worse. Do I recommended The Battery for fans of zombie cinema looking for something a little different? Yes, yes I do. If that’s you, give this one a shot.