The Art of The Evil Within – Book Review 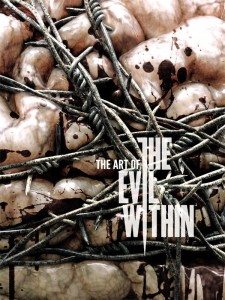 Design is one of the most important elements in creating a successful video game. From the weathered look of a scar-laden character to the blood-stained walls of an abandoned asylum, it’s the most minute details that can help a game sink or swim. If The Art of The Evil Within is any indication of the horrors that await players of The Evil Within (the highly-anticipated survival horror video game from Resident Evil creator Shinji Mikami), then it’s going to be quite the ride.

This behind-the-scenes coffee table book examines the most relevant characters, locations and weapons of The Evil Within, breaking down the gruesome world into five chapters: Heroes, Villains, Environments, Props and Marketing.

Each chapter title is self-explanatory, with the first three being the most comprehensive. Readers are treated to detailed illustrations of the main characters and villains, from conception to the final designs. Blurbs from Ikumi Nakamura, the lead concept artist, pop up every now and again with helpful insights regarding design choices and rationale, touching upon subjects like how the facial features of a character were refined, how a certain villain blends elements of Japanese and Western horrors, and how the game actually started as sci-fi before survival horror was decided upon.

The Environments chapter features some gorgeous illustrations of the games various locations, the most important appearing to be the asylum, where the designers incorporated a lighthouse into its final product to stand out from other games that use an asylum as a location (Nakamura, in one of her blurbs, even goes so far as to acknowledge that some of the locations featured in The Evil Within are typical to the genre, but states that “typicality was just what made it so appealing”).

The final chapter, Marketing, showcases some impressive poster designs and stills from the game itself before a quick wrap-up message from Nakamura.

The design work featured in The Art of The Evil Within is spectacular; even the most grotesque elements have a beauty to them that should be quite striking in motion. The art book is quite comprehensive with its backstories on the heroes, villains and locations, so it’s best to be looked over once you’ve completed the game (if you intend on playing), as there are a few potential spoilers.

For the gamer looking for an impressive companion piece to the game or the person who appreciates the massive amount of design work a video game takes, The Art of The Evil Within is a beautiful display of graphic elements, from concept to culmination and everything in between.