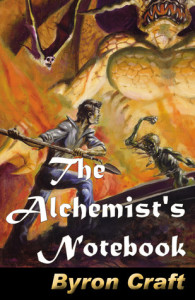 Reviewed by James B. Carter

The idea for The Alchemist’s Notebook started way back in 1978, when it was initially going to exist on celluloid, but unfortunately for cinephiles the world over, the movie incarnation of Craft’s story, originally entitled THE CRY of CTHULHU, just wasn’t in the cards.

Roughly thirty-five years later, Bryon Craft proves that persistence will always win out, as the novelization of his film idea doesn’t just pay off, it pays off in spades.

It isn’t only Craft’s impeccable writing skills that shine, so does Tom Sullivan’s artwork, which just doesn’t grace the cover, but is speckled throughout the pages of Craft’s epic tale.

If you’re longing for bizarre creatures, mind control and hyper unique other worldly environments, then Byron Craft has written a must read book for you.

The Alchemist’s Notebook is not only an homage to the work of H.P Lovecraft, but it’s as if he wrote the book himself, possessing the mind and fingertips of one Byron Craft.

The novel is written as if it were based on true events taken from a diary kept by Janet Church, the journal of Heinrich Todesfall and a series of audio recordings made by Janet’s husband, Faren Church. Each story is seamlessly sewn together, acting as one flawlessly written narrative.

The story is highly imaginative, and written with unapologetic sophistication, although brilliant, It’s not a casual read. If you want an intense one of a kind journey, steeped with wormholes and alien life forms, then by all means jump down Crafts rabbit hole.

Byron Craft is so astute at bringing to life these fantastic thoughts and intriguing storyline that sometimes you wonder if the story he has penned is fictitious at all.

The Alchemist’s Notebook, is the first chapter from a planned trilogy, so strap yourselves in and prepares for the mysterious unknown, because what Craft has graced us with thus far is just the beginning.