The ABCs of Death – Movie Review 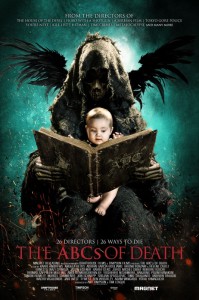 The ABC’s of Death is a fantastic idea. Twenty six filmmakers were given a letter of the alphabet and had to make a very short film dealing with a style of death relating to their chosen letter. It is an intriguing and fairly original idea.

This film is, perhaps, one of the more difficult reviews I have had to write. Not because I am at a loss of what to say.  Trust me, my soapbox is at the ready.  Rather, it’s because I am of two opinions here. Mind you, one of them is stronger than the other as you will discover.

I want to applaud the audacity and originality of the idea of the film and the lengths the filmmakers go to be different, while at the same time condemning most of them as the ugly and reprehensible segments that they are.

I will first speak of the good. The best segment is, unfortunately, the very first one. A is for Apocalypse is a haunting, shocking, and in the end, sadly poetic film about a wife trying to murder her husband. It was directed by Spanish filmmaker Nacho Vigalando, who did the original and exciting film Timecrimes. He is a filmmaker of ideas and is certainly one to watch.

There are three other segments that are good but still fall short.  S is for Speed is fun in its concept. It pays homage to the fast cars and busty women films that Russ Meyer made popular in the late sixties and early seventies. It is, at first, a good time but peters out too soon for such a short segment.

Ben Wheatley’s U is for Unearthed is an original idea where a vampire is being chased and then completely destroyed by townspeople. We watch all of the action through the eyes of the vampire. It is quite good, but there is not much more to it than that.

The other fun one is E is for Exterminate, directed by genre queen Angela Bettis. It centers on the simple tale of a man versus a spider. Again, it is fun for a while, but it loses steam all too soon. It is clever, but that is not enough.

As for the rest of the film, it runs the gambit of being silly and boring to completely inappropriate and offensive.

Segments such as F is for Fart, where a teen school girl is erotically obsessed with smelling her teacher’s gas, and Lee Hardcastle’s T is for Toilet, which is done in Claymation, are just dumb and pointless.

John Schnepp’s W is for WTF? and Adam Wingard’s  Q is for Quack show how void of ideas those two filmmakers were. This is too bad, as Wingard wrote and directed one of the better examples of the modern horror/ thriller with 2010’s A Horrible Way to Die. That film was full of original and interesting ideas whereas his work on this project is, unfortunately, not.

I will now jump to the three most offensive of the segments. These three “films” are shocking just to be shocking.  This is a shame since one of the filmmakers is currently one of the finest up and comers in the horror genre.

Ti West directed one of the best horror films of the last decade with his 2010 throwback masterpiece, House of the Devil. That film announced the arrival of a true filmmaker who knows his horror. His 2011 follow up, The Innkeepers, wasn’t as as good, but it still showed promise in a few scenes.  His segment in 2012’s anthology, VHS,  was one of that movie’s best. His segment in this film, M is for Miscarriage, is pointless, disgusting, and precisely what the title suggests. It is a true shame to see this kind of work from a filmmaker of his talent.

L is for Libido by Timo Tjajanto is a horrifyingly bad film in which contestants are forced to masturbate and the last one to ejaculate gets murdered. At first, they are presented with visual stimulation such as naked women, but then they are toyed with to make it more difficult to “finish”. One woman is presented for stimulation is an amputee.  Later, in the most offensive moment of the film, they are forced to continue as they watch a young pre-teen boy get molested by an older man. This is not fun. I am not a prude, not by a longshot, but there are certain moments that are exceptionally inappropriate when used as entertainment. Child molestation has no place in a film that is supposed to be fun.

While I am on that subject, the third worst, and most offensive segment, is Jason Eisner’s Y is for Youngbuck.  This segment tells the story of a teen boy getting revenge on the janitor who befriended him, and then molested him. We are treated to atrocious sights such as the janitor watching the boys play a game of basketball, sweating profusely.  Then, when the boys have left the gym, the janitor goes to the benches and licks the sweat from them. Yes, you heard me correctly. You just had to read it. I had to see it! You’re welcome.

The film entire is one giant missed opportunity. The filmmakers could really have done some solid work with this assignment, but instead chose not to. This is too bad, as horror films can be fun. We can be shown blood, gore, and terrors, but we should still have fun with it. The horror genre is a roller coaster, and the most successful horror films give us the thrill ride with originality and style.

There are a few moments of originality, but also a continuing and pervasive absence of clever twists. The ideas are there occasionally, but they never grow.  A few segments are creative, and most are provocative, but they stick in our minds for the wrong reasons. It is not enough to shock or sicken us without a point. Strange just to be strange is no fun. David Lynch’s work is amazingly baffling and enormously strange, but it has a point and is done with the hands of a true artist.

Is there talent here? Yes, I think, but it is dormant in most of the segments. The film is disjointed and messy.

The ABC’S of Death is not good horror and most definitely not good fun. It is a catastrophic missed opportunity and a waste of some solid talent.

I am fighting my urge to use the phrase, “A is for Awful” or “G is for Garbage.” It is extremely difficult..