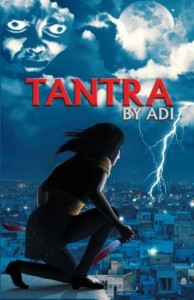 Stories about tough-as-nails women who hunt vampires and other things that go bump in the night are not exactly new. Indeed, there’s practically a cottage industry of such fiction. But how many of those are set in India? TANTRA is certainly the only one I can think of.

Anu Aggarwal is a young Indian woman who has been living in New York City for the last several years with her fiancé Brian. Anu isn’t exactly an ordinary emigrant though; she fights vampires for a living using the mystical powers that an international organization trained her in. One night a vampire kills Brian, and the killer’s trail leads Anu back to Delhi, so she returns there and lives with her over-protective aunt while hunting Brian’s killer. Anu’s return to India is a kind of culture shock for her, as she has been away long enough to become Westernized. Not surprisingly, she resents the social and cultural constraints on what a young unmarried woman can do in Indian society. Anu’s family wants her to go on arranged, chaperoned dates and meet a man to marry; she just wants to kill the bad guys. Anu’s vampire hunting quickly gives way to a very different kind of threat (possibly too soon; I’d have liked to see a new, Indian-centric take on the vampire). Anu quickly becomes embroiled in an even larger confrontation than she had imagined with an evil guru who has mastered the black magic of the tantric arts and plans to murder hundreds of kidnapped street children to become even more powerful. Anu herself must learn new mystic/psychic arts if she is to succeed since brawn, reflexes, and quick wit alone will be insufficient to win the day.

TANTRA is a kind of paranormal romance thriller. There’s plenty of action, car chases, brawls, and mystic duels, alongside flirtation and romance. There is no graphic sex, nor does the romance descend into mushiness. I suspect that a comparison between TANTRA and Buffy the Vampire Slayer is inevitable. Indeed, TANTRA is essentially the story of Buffy with the serial numbers filed off and transported to India. In that sense, TANTRA is not an entirely original premise, but it’s entertaining nevertheless, and the Indian setting and culture makes this a memorable read. I don’t know much about India, its culture, mythology, folklore, religions, etc. In fact I think the only fiction I’ve ever read that was set in India – other than a couple of the Flashman novels – was Dan Simmons’ SONG OF KALI (if you have not yet read that, I recommend seeking out a copy immediately after you finish reading this review). As unfamiliar as India was to me, at no time was I lost while reading TANTRA; indeed, it served as a gentle introduction to contemporary Indian culture.

Presumably, TANTRA is intended as the start of a series since – despite the initial premise – it’s not really a book about vampire-hunting, nor is the murder of Anu’s fiancé ever resolved. There’s certainly room for the characters and setting to grow, as there are mere hints of many of the supernatural elements touched on in TANTRA. For example, what exactly is the organization that trained Anu? What are their goals and capabilities? What do vampires think about the fact that a group of humans is hunting them? What other supernatural elements exist in the setting of TANTRA? It seems clear that Hindu mysticism is real, and we know there are vampires, but what else?

I recommend TANTRA not because the premise is particularly original – it is not – but because it provides an interesting, fresh cultural milieu and set of supernatural powers that should be of interest to most Western readers. This seems to be Adi’s first novel, but he’s a talented writer and I look forward to reading more from him. And I certainly enjoyed the glimpse inside Hindu mysticism and beliefs about the supernatural provided by TANTRA.