Tales from the Crypt / Vault of Horror – Blu-ray review 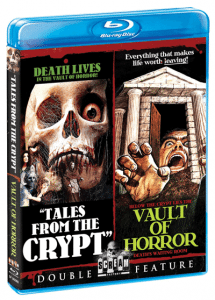 Before there was the famous HBO series of the same name, Tales from the Crypt was a comic book from the EC company. After that, it became an anthology movie from the UK made in 1972. And. It. Was. Good. So good, in fact, that it spawned an anthology sequel in 1973 named after another EC horror comic line, Vault of Horror. And it was also damn fine. For years, serious horror fans have wanted these movies to come back out, and more importantly, for Vault of Horror to have an uncut release, as all previous versions on disc were heavily cut. Well thankfully there are the horror heroes over at Scream Factory who not only brought both classic flicks out on Blu-ray for the first time, but made them a two-pack for extra affordability, and released Vault of Horror in both its cut version, and now uncut version.

Tales from the Crypt has five people meeting a stranger in a cemetery who seems to know far too much about them, and why they are there. Each person plays the lead in their own short horror story. There’s the one with the killer Santa Claus that was later told again as the pilot episode of HBO’s Tales from the Crypt.  There is one that is an unofficial take on H.P. Lovecraft’s “The Outsider” and another that is an acknowledged adaptation of “The Monkey’s Paw.” There is a sad, touching tale of revenge staring the always awesome Peter Cushing. The last story is my favorite, and it’s about a proper British bastard being put in charge of a home for the blind, how he mistreats his patients, and the poetic justice they serve him at the end. Of the two movies, this is the stronger, but what followed it a year later was also loads of creepy fun.

Vault of Horror has a similar starting point; five strangers board an elevator and wind up in a basement in which there is no exit. So the people start to pass the time by telling each other of the weird dreams they had the previous night. That’s when the tiny terror tales truly begin, starting with a fun, but easily predictable one, involving a couple of murderers getting their just desserts at a very strange diner. The next is a simple but effective story of a wife driven crazy by the exacting demands of her OCD husband. The third story involves magicians, real magic, and murder. The next is the weakest of the bunch and involves an insurance scam and someone being buried alive. The last one has Tom Baker (yes, Dr. Who fans, that Tom Baker) as an impoverished painter living on Haiti. When he learns that his paintings have been selling for thousands by someone who told him they were worthless, he turns to voodoo to get his revenge.

On to the extras in this new Blu-ray two pack. Okay, now that that’s over… Yes, sadly there are no extras here, and that is a shame, but honestly, I’m just happy to have these movies looking amazing on Blu-ray, and for the first time, fully uncut. So, if you remember HBO’s Tales from the Crypt fondly, do yourself a favor and watch what preceded them and, quite frankly, did it better. This double dose of classic horror anthology goodness is highly recommended by me.