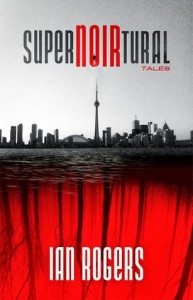 Every House Is Haunted, Ian Rogers’ ReLit award-winning debut collection, is a recent favorite of mine. It was a wonderful read, yet left me craving more. What better book to read next than this follow-up collection?

The aptly titled SuperNOIRtural Tales is a collection of five previously published short works that fuse noir with horror to create something refreshingly unique. Each story is told from the perspective of Felix Renn, a private investigator with a tendency to attract the supernatural. This would likely be bad enough in itself, but things are a little more complicated.

Felix’s world is our own, with one major difference: The Black Lands, a strange and dark dimension residing alongside this one. The Black Lands are populated by a host of bizarre, terrifying creatures that make their way over here through Portals, causing mischief, mayhem and more than a little bloodshed.

Rogers drops details here and there about the origins and topography of the Black Lands, and they’re intriguing and often used to chilling effect. He’s proven himself to be adept at balance in this regard, never revealing too much or too little. The world he’s created is well-realized and populated with a great bunch of characters.

Felix Renn isn’t the stereotypical hard-as-nails gumshoe. On the contrary, his humanity is what makes him so endearing. He comes across as an average guy who repeatedly finds himself in, and stumbles his way through, some very strange, dark and life-threatening situations.

There’s a strong sense of humor throughout the book, a big part of which comes from the well-drawn cast of secondary characters. Felix’s ex-wife/current assistant Sandra, for instance, is a great foil for Felix. The banter between the two is hilarious at times. These moments of levity are much appreciated, at times feeling almost necessary, because when things get scary, Rogers doesn’t hold back.

The horror escalates from the first story to the penultimate (the last story is a short and chilling little piece in its own right, but somewhat anticlimactic, placed as it is after the brilliant novella The Brick).

The Brick is easily the highlight of the collection. It’s a creepy and effective haunted house tale, a terrifying monster-battling romp, and a strikingly poignant family saga that asks some probing questions regarding self-sacrifice. This one had me laughing, tearing up and nearly jumping out of my chair in equal measure.

Another standout piece, The Ash Angels, is a bittersweet story that takes a new angle on the old horror trope of characters facing their greatest fears. It’s not fear the characters face here. It’s their personal sorrows, anxieties and uncertainties being amplified and turned into psychological time-bombs.

All of the stories here are well-crafted and work on multiple levels, and the mythos Rogers has created is both very frightening and very fun. Readers of horror, crime fiction and urban fantasy will find much to enjoy, and if you’re as enamored with the whole thing as I am, you’ll be pleased to know that a Felix Renn novel is currently in the works.