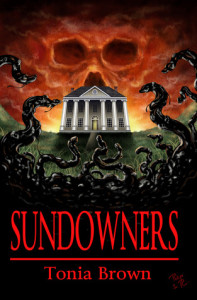 In the deep heat and humidity of a small Southern town, Coil Stevens returns to the family homestead after a fifteen-year absence. Years ago, a terrifying event left Coil’s sister, Cass, on the verge of death at what appeared to be her brother’s hand. Plagued by gossip and rumor that he raped and beat his sister, Coil fled his hometown and put down roots in New York where he struggles to recapture the artistic talent of his youth that disappeared after the incident in the woods. In fact, it seems as if Cass leeched the talent out of him as she enjoys a successful career.

But now, Coil has come home to deal with his sister who has had a recent accident and now suffers from sundowners: a syndrome of episodic violence that coincides with the setting sun. As Coil finds himself enmeshed once more in the whispers he ran from fifteen years prior, he re-discovers his talent by frenetically painting in his sleep. His paintings, however, point toward an evil that has infected the townspeople and driven them to lurid, murderous acts.

The incident in the woods holds the key, and to help his sister, Coil must face something darker even than the accusations he faced as a teen. He returns to the woods to confront the horrible thing plaguing his sister and the town.

Brown’s strongest writing happens smack dab in the middle of this book. The first chapter is obscure and repetitive. A voice calling from far away. A summoning that is eerily recognizable. A command that must be followed. And so on and so forth. In reading this, I rolled my eyes. I couldn’t help it. I feared that what followed was going to be much of the same, and I couldn’t bear the idea of dragging myself through boring horror tropes for 206 pages. My apologies to Ms. Brown. I was wrong, and I have never been more relieved.

There are some truly horrifying moments that occur in small licks throughout the book. The chapters written concerning the townspeople are particularly well done, and the novel builds nicely toward the reveal of exactly what happened to Cass and Coil in the woods and the final showdown. The pacing creates a feeling of suspension, a sense of eeriness that crawls up the spine and lingers, and many of the scenes stick with you long after reading (read the chapter called “Pitter, Patter” and see that I’m not kidding).

I’m not sure what I was expecting the reveal to be. I’ve always found not seeing the monster to be a better bet than revealing it in all of its obscene glory, and I appreciate the anticipation that Brown creates. The sense of unease and wrongness that she develops in so many of the scenes is spot on. But the reveal, which deals with the nature of the muse, wasn’t exactly what I wanted. In fact, it was something of a strange let down. The descriptions are wonderful, and Brown is a talented writer, but there was a piece of me that found the evil lurking in the woods a bit, well, hokey isn’t exactly the right word, but it will serve.

Despite my misgivings regarding the ending, I’d still recommend the book. There are certainly moments that will keep you watching that strange shadow in the corner and awake long into the night.