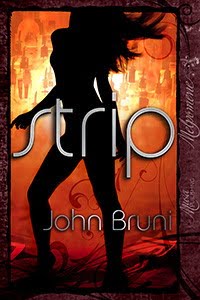 I’ve always loved novels and films about heists. They always include a fun cast of various losers, misfits, and thugs who embark on an audacious get-rich-quick scheme that never quite turns out the way they expect. If it’s a light-hearted kind of farce, like OCEAN’S ELEVEN, then everything mostly turns out fine in the end. STRIP isn’t that kind of happy-go-lucky tale, and John Bruni has not given us a fairly tale ending where the heist team strolls off into the sunset rich and happy. Quite the opposite.

Any good heist tale starts with a cast of miscreants, their scheme to get rich beyond their wildest dreams, and complications. Lots and lots of complications. STRIP is no different. Here we have a mafia-owned strip club as setting and target for the heist. The members of the heist team are memorable, including: the not-so-lovable strip club DJ who despite being such an odious loser manages to sleep with a shockingly large number of women in the novel; a loose cannon bodybuilder who has taken a few too many steroids for his own good; a brutally efficient mastermind and planner who doesn’t seem nearly as capable as his reputation might suggest; and a meth head getaway driver with a fetish for samurai swords. Of course we understand from the start that things are going to go horribly, violently wrong. Complications include a healthy dose of Murphy’s Law – everything that can go wrong truly does here, even before the heist officially begins – and an undercover cop posing as a stripper to take down the local mob operation.

There are lots of minor characters to flesh the whole thing out, nearly all of whom are as entertaining as the protagonists. This is a truly fast-paced novel that was a lot of fun to read. It’s filled with relatively graphic violence and sex throughout, so don’t give this one to your grandmother who would probably prefer to read a cozy mystery set in a knitting shop. There are a few chapters in the middle of STRIP, during the siege of the strip club when the remaining members of the heist team are holed up inside and not really sure how to proceed, where the action bogs down. I suppose that’s probably almost inevitable in a novel about a hostage situation, but STRIP would have benefited with some trimming there. With a little tweaking, I think this could even be filmed as a break-out cult classic kind of indy film that casts Steve Buscemi somewhere in the mix.

STRIP is, unabashedly, a heist novel in the noir tradition. It has all the inevitability of a Greek tragedy, as one would expect. It is a story about losers, with big dreams, who are willing to go to great lengths and commit acts of tremendous violence to achieve those dreams. Those involved are willing to do almost anything except get a regular job to make it big. Indeed, it’s almost a running joke that Will, the strip club DJ, could have averted the whole mess by simply being willing to pick up a part-time job when his hours at the club were cut. But we know from the opening pages that nothing good will come of these dreams. There will be no happy endings for the characters of STRIP.

If you like modern-day noir, especially heist novels, I would highly recommend STRIP. Sure, the ending is a bit over-the-top – maybe unbelievable is a better term – but the sleazy characters who populate STRIP are a great bunch of lowlifes and the action is mostly non-stop. To fully appreciate STRIP, I think you have to accept a story about bad people doing bad things, mostly to other bad people, but also one in which innocent people get caught up in terrible events and suffer the consequences. If you like the idea of a noir-ish heist, you’re going to enjoy STRIP.