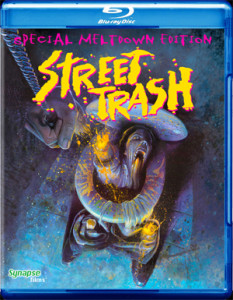 Street Trash is one of those titles that the non-horrorheads have never heard of, but us cool kids in the know have already seen, or at the very least have heard about for years. If you frequented the horror section of your local mom and pop video store in the 80s, then you will remember the crazy cover if nothing else. You know, the one showing some guy melting away into yellow goo/puss and falling into an open toilet? Never before has there been such truth in advertising as that single image tells you all you need to know about this weird little movie. If you are one of the few that have already seen this flick then you’re either part of the cult that loves it, or one of those that hate it. There seems to be no middle ground with this one.

If you’ve never seen Street Trash but are familiar with the films by Troma, that would be a good shorthand description of what to expect here. No, it’s not exactly like the movies that escape from Tromaville. Actually, I think this movie is better made and acted overall than those flicks. However it is chock-full of blood, boobies, and non-politically correct humor that shoots for the “how offensive can we be” moon and often hits that mark. If that sounds like the movie for you, then keep on reading. If not, then go ahead and stop now as it’s all downhill from here, but oh what a gloriously goofy ride it is.

The story of Street Trash can be described in a single sentence: some bums in a big city get their hands on some wickedly tainted hooch that dissolves them away into puddles of goo when they drink it. And really, that’s about all. Sure there are some added bits like a Dirty Harry wannabe cop and the local mob. There’s a homeless, psycho, Vietnam War vet who acts as the main antagonist of the movie, and a kind-hearted woman who looks out for some homeless kids at the local auto junkyard. But really, any sort of plot only exists as an excuse to show off the real stars of this show: the way over the top goofy, goopy, gory, gross-out gags and the inappropriate humor, and in those two things Street Trash really shines. So if jokes about necrophilia, people urinating (and sometimes vomiting) on their fallen foes, and homeless people playing keep away with a severed penis sound like your kind of entertainment, then this movie is for you. Oh and did I mention the gratuitous nudity? Yep it has plenty of that too. Bonus!

This new Synapse Films release of Street Trash is the “Special Meltdown Edition”, and befitting that grand title, it comes packed with a bunch of special features. First and foremost is a feature length documentary called “The Meltdown Memoirs” that runs over two hours and is all about the making of this infamous film. Then there are two audio commentaries, the first is with writer/producer Roy Frumkes and the other is with director James Muro. There is also the original 16mm short film “Street Trash” that was the genesis for the feature film and that runs 15 minutes. Actress Jane Arakawa is interviewed on here and there are a number of deleted scenes and outtakes, a promo teaser, and the original theatrical trailer too. Add all that up and you get a ton of extras for a largely overlooked movie. Hell, some million dollar blockbusters don’t come out with this many special features, so Synapse Films should be commended for the stellar job they’ve done with this new Blu-ray.

Hopefully by now you should know if Street Trash is the film for you. If so, then be sure to pick up this new Blu-ray as this flick has never looked better. If this brief synopsis has turned you off of it, then stay far away as the actual flick is all this and so much more. For fans of crazy cinema, I can easily give Street Trash a hearty, if slime-splattered recommendation.