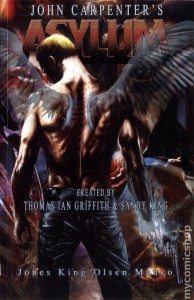 Storm King productions web store is officially open for the gift giving season. Storm King’s premiere title John Carpenter’s Asylum has great gift ideas from t-shirts to posters including their web store only limited edition art book style hardcover graphic novel. Want your gift giving to help someone in need? Numerous John Carpenter related Hero Initiative prints are available as well. Order cut off for guaranteed Christmas delivery is December 14th using standard shipping and December 19th if you choose to ship FedEx. If you place an order by December 15th for the limited edition John Carpenter’s Asylum Hardcover you will receive an exclusive Asylum crucifix flash drive with a copy of the animated trailer! Go to www.stormkingproductionsstore.com today!

The hardcover trade release is a full 200 pages which contain the 144 comic pages from the first six issues as well as a sketchbook from Leo Manco that shows pages in the three different stages of development (pencils, inks, colors), a “how to”guide covering the creation of the John Carpenter’s Asylum animated trailer, and three new demons never before seen in the comic! The limited edition artbook style hardcover will have the same interior with no new demon information but does include book plates that have been hand numbered with signatures by Sandy King Carpenter, John Carpenter, Leo Manco, Bruce Jones, Trent Olsen, Janice Chiang and Thomas Ian Griffith. The run will be strictly limited to 500 and is available ONLY in the webstore.

About John Carpenter’s Asylum:
There’s a war coming to the City of Angels. In tunnels beneath the city, in the dark alleys among the homeless, demons lurk and Lucifer bides his time. One man knows.  One man sees. One man walks those dark streets. Father Daniel Beckett’s seen demons and he’s spoken to the Devil, but he’s never seen an angel and he’s never spoken to God.  Obsessed and driven as much by betrayal as righteousness and anger as redemption, he walks the smoke-filled encampments of lost souls like Dante’s nine rings of the Inferno. He is God’s warrior at war with God.

With this step into the comic book world, John Carpenter brings it all to the serial world he’s loved since childhood. Supernatural horror with that twist of fate that only flawed mankind can provide.

Want the most up to date information on John Carpenter’s Asylum like us on Facebook at https://www.facebook.com/JohnCarpentersAsylum