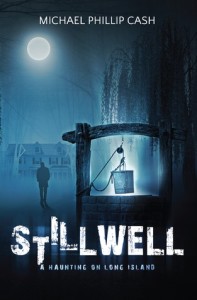 Stillwell: A Haunting on Long Island

Having read Michael Philip Cash’s earlier novel, Brook X—A First Hand Account of the Great Cicada Invasion, I received Stillwell—A Haunting on Long Island with a sense of anticipation tinged with an odd feeling of familiarity, as though I were about to read something by an old friend. I’ve never met Cash nor corresponded substantively with him, but I remembered the feeling of comfort-within-horror in the earlier novel.

As things turned out, the feelings were justified.

Stillwell examines a broken family. Paul Russo’s wife has died and his three children are not handling the crisis well. Nor is he. He has largely ignored his job during the final weeks of his wife’s illess…and his children. Following the funeral, he must face the inconceivable: a life without her. At the same time, however, he has a much-needed opportunity to get back to work. A life-long friend has asked him to sell a centuries-old mansion on Long Island. The commission from the sale will go a long ways toward re-establishing the Russos’ financial stability.

There is a drawback, however…actually two.

The first is that Stillwell Manor, easily worth cool twenty million, will likely be a hard sell. It is the scene of the murder-suicide of the previous owners, which will turn many prospective buyers off; and it is haunted, in fact has been from the eighteenth century. Somehow Paul must deal with these difficulties, which only seem to increase the more he discovers about the old place and the more intimately he involves himself with the Andrews family, past and present.

The second drawback is even more formidable.

Paul Russo half believes that he is going insane. He has had dreams, evil dreams of his dead wife’s spirit in the clutches (literally) of a horrific demon, a beast-thing that will not allow her to move forward into the afterlife. As the story progresses—the actions taking little more than a week to complete—Paul fells increasingly drawn into the world of his nightmares that somehow, inexplicably, focuses on Stillwell Manor and the ancient well nearby.

The novel is less horror than ghost story. That is, there is an otherworldly feel about even the most terrifying events, usually recounted as occurring within dreams; while the actual “real world” circumstances are recounted with precisely, almost obsessive detail that balances and often contravenes scenes of horror. The story unfolds slowly, with the opening chapters devoting more time to Allison Russo’s death and Paul’s struggle to cope than with anything outré or unexpected. When the supernatural does begin to intrude, it does so almost unnoticed, building gradually to a combustive conclusion that simultaneously resolves both haunting: the one at Stillswell Manor and the one confronting Paul.

The storytelling is clear and precise. Perhaps my only critique of the book is that it leaves me with a lingering wish for more, that the tale had not been told quite so crisply—the same sense, by the way, that I had when finishing Brood X. Still, Cash tells his story well, creating and animating a bit of history as he invites us into a decaying, atmospheric old pile on Long Island.