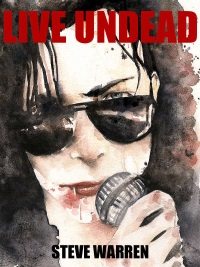 The first installment of the Undead Chronicles is now out, and you may want to check it out. If you like splatterpunk, then read on.

Live Undead tour the country, bringing their blood-slicked shock rock to out of the way dives and underground clubs. Their obsessed fans follow them from city to city, unaware of the band’s horrifying secret. The lacerated throats and acts of self-mutilation isn’t simply makeup and effects – it’s all real. The members of Live Undead are vampires. They prey on the black-clad, disaffected, and depressed teenagers who flock to their shows, while leaving a trail of dead bodies in their wake.

Depressed, sexually confused, and bullied at school, Nothing desperately longs for escape. He dreams of rock and roll stardom and thousands of adoring fans, but will settle with knowing what it’s like to be special. That’s the question he needs answered when he finally gets his chance to meet Live Undead.

Eric’s life has been in a downward spiral ever since his pregnant girlfriend went missing thirteen years ago after a concert. When Eric stumbles across Live Undead, he’s shocked by their uncanny resemblance to the band that had played the night his life changed forever.

Steve Warren is the author of the Undead Chronicles, which currently includes thee installments. He also wrote the screenplay for an independent horror film scheduled to being production in Spring 2014. He is currently hard at work on his next book.

The book is currently available from Amazon at the following URL:
http://www.amazon.com/Live-Undead-The-Chronicles-ebook/dp/B0087TFO8O/