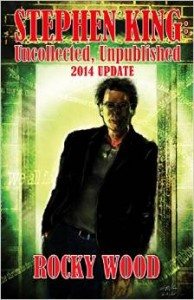 Do you consider yourself a Stephen King super fan? Do you spend your days reading and re-reading his works, analyzing the words until your eyes bleed? Is your life’s goal to know every single work ever written by the master of horror?

No need to worry, Stephen King: Uncollected, Unpublished has got it covered.

Author Rocky Wood has done the legwork, uncovering 58 unpublished and 61 uncollected works by King, and gathering the research over the span of four successful editions. The 2014 Update sees the addition of several new discoveries, including summaries on two short stories, a poem, and a play King wrote for his boy scout troop at the ripe age of 12. Some of the published works analyzed in the update include an alternate ending for 11/22/63, a story released to French and German fans entitled Bad Little Kid, and In the Tall Grass, a novella by King and his son, Joe Hill (author of Horns and NOS4A2).

A few things this 2014 Update is not: it’s not the 2012 edition, which clocks in at a staggering 400 pages. The 2014 Update runs about 60 pages and is the addendum to 2012’s Stephen King: Uncollected, Unpublished – Revised and Expanded edition. It’s also not a collection of stories, so don’t pick this up with the intention of reading any actual work from King (although he does pop up sporadically throughout the pages, offering commentary on some of his works).

If Stephen King 101 was a school subject, Stephen King: Uncollected, Unpublished (and its subsequent editions) would be the required textbook. The 2014 Update is best suited for those with the previous editions or for those looking to expand their knowledge of everything King.