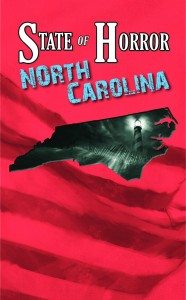 The selection process was trying for me because I could only take 13 stories and I had some great stories to choose from. I believe the stories selected have a lot to offer and will make for a wickedly scary book. It is exciting to be working with this group of authors. Some authors make appearances in other State of Horror books and some are making their first appearance in the State of Horror family. It was really fun for me to see these authors’ takes on the state of North Carolina. I really believe readers will enjoy the group of stories we have put together. In addition to these terrifying stories about the dark side of North Carolina, there is as always, a new story from Armand Rosamilia in the Dying Days world.

As we get closer to the release date be looking for more information on these authors and their stories.

STATE OF HORROR: NORTH CAROLINA TO BE RELEASED JANUARY 2015

So in random order is the list of authors and their stories to appear in Charon Coin Press’ State of Horror: North Carolina.

Dying Days: Grey Man by Armand Rosamilia
The Sacred Cave by Kathryn M. Hearst
The Devil You Know by Matt Andrew
By the Crescent Moon by Kenneth W. Cain
Chicken Bingo by Frank J. Edler
Death with Benefits by Randal Keith Jackson
Dead Girl Mary by Susan Hicks Wong
Fourth Point by Spencer Carvalho
Tools of the Trade by Margaret L. Colton
A Heartbeat in the Darkness by Stuart Conover/Kerry Lipp
Paddy Wagon Pete by Larry Heydorn
A Little More Mud in the Pasquotank by Nathanael Gass
A Feast of Sorrow by Frank Lanerd

State of Horror: North Carolina is scheduled for release January 2015 by Charon Coin Press. Look for interviews from the authors about their inspiration for their stories and their involvement with the State of Horror anthology.

Check back here for more information and upcoming announcements from Charon Coin Press.