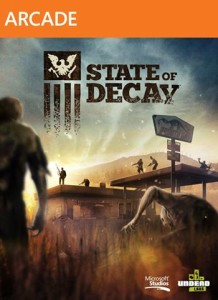 State of Decay is yet another zombie video game, but it does have two things going for it that sets it apart from the rest of the rotting pack. First, it’s a downloadable game for the Xbox 360 and PC and so it can be had for a very reasonable price. Second, it focuses more on the survival aspect of living in a zombie apocalypse and less on the shooting dead guys in the head part. Although, to be fair, it does have a bunch of that too. So it gets some high marks for trying to do something new, but does it succeed at being a good game? Well grab a baseball bat because guns are more trouble than they’re worth, we’ve got to raid the local grocery store before everyone dies of starvation.

The game begins well with a very minimalistic approach. You start as a guy just back from an extended camping trip and surprise, surprise: zombies! You have a backpack, a wisecracking buddy, and a stick as your only assets in this world of the walking dead. Before long you do find other weapons, including a gaggle of guns, not to mention a bunch of other survivors who you can alternately play as should your main character need a rest or perhaps even die. Yes in this game death can happen at any time and when it does, it’s permanent and with the auto save feature, there are no take-backs.

The emphasis in State Of Decay is survival, not total zombie extermination like most other games. You will raid houses and stores looking for food, medicine, ammo, and building materials needed to reinforce your home base. You will have to do this quietly unless you want to deal with a hungry horde of the undead.  While you can find guns and ammo, shooting just brings more zombies, and there are never enough bullets. This desperate, “do what you’ve got to do to survive” gameplay is easily the best thing about SoD, even if it doesn’t always work.

To be sure, this game has its share of flaws and some of them are big ones. Zombies clip into and through walls and the camera is not your friend when you have to do battle in tight places like houses. It loves to hang outside of or behind walls so you can’t see the zombies you are fighting with, and that’s always fun. Worse yet, all of the characters in your survivor community and absolutely worthless. They’re whining, zombie-fodder when you’re not in direct control of them and only seem to exist to get into trouble so you can save them. In most zombie movies and books the theme is that humanity must stick together or fall apart, that no one can survive on their own. However in this game, I would have preferred to be alone most of the time for all of the nothing that all the NPC characters do to help you. Also it really could have benefited from a fast travel system as you spend a lot of time just driving from place to place, and that’s just kind of boring.

You do get a big chunk of game for what you pay for. State is an open world game and quite sizable for a downloadable title. There are also a bunch of weapons, guns, cars, and people to meet and save. What it does lack is a bit of unique content to keep the game from becoming repetitious after too long. It’s not overly annoying, but if you’ve cleared out a house full of zombies once, you’ve done it thirty times in this game. The story is also basic zombie ficiton 101; it’s serviceable but it’s nothing revolutionary. The characters are fleshed out some, well at least a few of them are, and there is even a bit of humor to be had here that actually made me laugh out loud more than once, which is always welcome in a game.

For doing something different, State of Decay gets my nod of approval. It’s a fun, survival-focused take on zombie games. It’s not perfect, but few things are, and for the price you pay, this game just can’t be beat. Consider it well recommended.