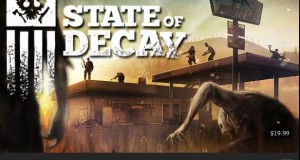 I’m a HUGE fan of zombies, having grown up in the 80’s with classics like Evil Dead and Return of the Living Dead.  Now that I’m a little older, it gives me a sense of pride that one of my favorite genres has reached the mainstream thanks to vehicles like The Walking Dead.  While there have been quite a few PC games that have tried to capitalize on the zombie theme, one of them that does a great job of capturing the feel is State of Decay by Undead Labs.  Why?  Keep reading, chum.

OVERVIEW
The State of Decay base game is very much like a typical “open world” game.  It can say it’s open world all day, but in the end, there is a storyline to be followed.  That’s where the Breakdown downloadable content (DLC) sets it apart.  It literally hands you a fully-stocked open world and says, “Go get ‘em!”

You start as a single character with some piddly supplies and from that point forward, you do everything in your power to stay alive.  You join up with other survivors, gather equipment and supplies, upgrade your living quarters and basically try to stay ahead of the shambling dead.

One of my favorite elements in the game has to be that the “stuff” you are acquiring is finite.  There is no endless supply of power-ups.  As your group gets larger, their demands on your limited supplies increase, necessitating you to keep heading out to keep everyone fed, medicated, etc.  That isn’t the only thing that’s limited.  The vehicles in the game are the vehicles that are in the game…period.  This isn’t Grand Theft Auto where you can trash car after car and it seems like there is a never-ending assembly line of vehicles being churned out for you to destroy.  Roll over your truck in the middle of nowhere and get ready for a nice long walk back to safety if you haven’t passed another ride.  What is infinite, however, is the zombies.  Killing them is almost an exercise in futility.  They just keep coming. 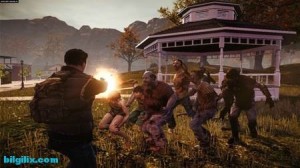 GAMEPLAY
How does it play?  Well, I have an off-the-shelf rig from a big box store with no bells and whistles and it runs the game pretty decently.  We aren’t talking state-of-the-art graphics or combat here.  It’s a hair above Diablo, which certainly isn’t an insult.  I particularly enjoy the vehicle physics.  Smash head-on into a fatty and you’re gonna be rollin’ on rims for sure.  You also kind of control the missions you can get sent on, asking your radio-gal to be on the lookout for supplies, weapons, ammo, or even other survivors.

Additionally, you can’t just walk into your new camp and take whatever you want.  You earn influence based on what you bring back and contribute to the collective.  It’s a pretty neat mechanic – basically using reputation as a currency.  Early on, this makes your choices super-tough, but as the game progresses, and you accumulate lots of goodies, they get easier.  As your character stays up longer and goes on more missions, they start to wear down, necessitating switching off to different team members.  This is well done as well, since it only makes sense that you can’t press on indefinitely with the same person.  They need to rest like anyone else.

Another thing I love is the perma-death.  Billy gets himself into a spot that he can’t get himself out of and you can kiss Billy’s narrow behind good-bye.  Even in this, the game shines because you can send one of your other survivors out to look for your fallen comrade’s loot.  Even better, bringing back your fallen buddy’s stuff adds to your morale/influence.  Pretty slick.

Eventually, though, things are going to start running low and you’re going to have to bug out – in the RV, no less.  And that brings me to my one, and biggest, problem with the game.  When you do decide to leave town in the RV, you are basically ending the game.  At the point where you leave town, the game resets and you are basically starting from point one.  I can’t tell you why I hate that, but I do.  Let me go to a new town with my crew, even a limited amount of them, and my supplies, but don’t start me off at ground zero again like what I just spent the last 30 hours going through didn’t matter!

FINAL THOUGHTS
Despite my dislike of how the game ends/continues, I totally love it.  The gameplay is fun, the pressure to keep gathering materials is constant, and the theme is respected.  Would I like the end-game to be different?  Hell, yes, but the rest of the game is so excellent, that this is a minor issue in the big picture.  You develop an attachment to your people and watching them die really hurts, especially if you’ve been grooming them to gain experience and develop their skills.

State of Decay is a basic game that does what it does well.  It isn’t trying to blow your socks off with high-end graphics or innovative gameplay.  There are certainly worse things that I’ve done in my life with $20.  All this game is trying to do is feed our need to survive the zombie apocalypse.  You’ve just gotta hope that you don’t feed it back.